Tattoos appropriate for the workplace 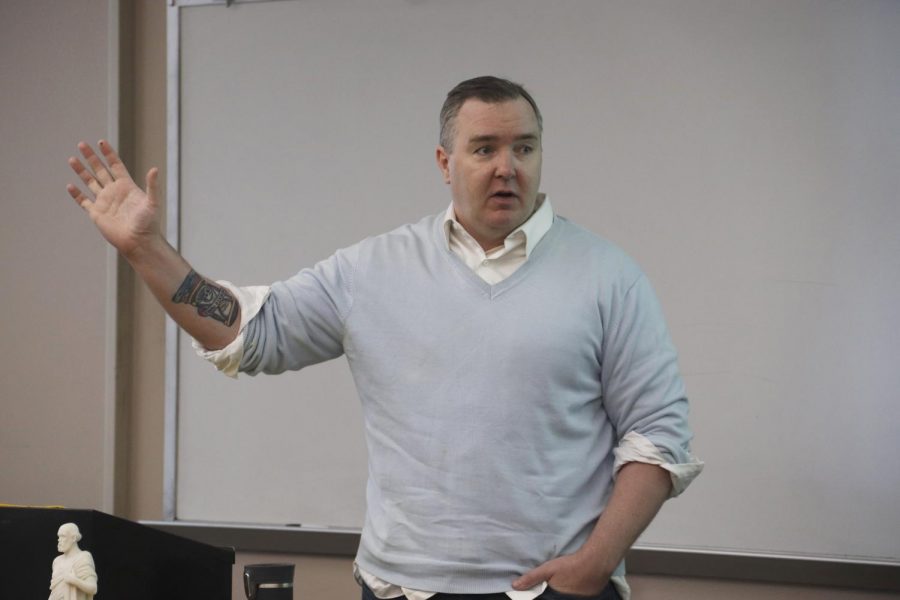 Dr. Peter Gratton, assistant professor of history and political science, teaches philosophy in Fayard Hall. He advises anyone considering a tattoo to think about how what they get will reflect on them as a person. Some believe tattoos are becoming more accepted in a professional workplace though the degree varies depending on profession and employer.

Over time, several norms of the workplace can find themselves in a flux including the availability of self-expression through tattoos.

“Sometimes, there is a certain stigma where you still hear when people come in, ‘Oh, I can’t get a tattoo down a certain spot because I work here,’ like in banks or nurses and things like that,” commented Casica. “I think it’s slowly going away, but it’s still there. Early on, I was just starting out, it was unheard of for a bank teller to come in and get a tattoo, and if she did, it had to be hidden and covered up whereas nowadays, people are allowed to have extra piercing or tattoos a little bit showing.”

Dr. Peter Gratton, assistant professor of history and political science, got his first tattoo when he was 18 years old, and of his three tattoos, the one on his forearm is visible at work. He has not noticed his tattoos negatively affecting his employment.

Gratton stated, “Previously, people would have looked at tattoos as something that only certain types of  people might get, but now rich or poor, whatever background you come from, whatever class background, criminal background, whatever, it’s not a marker of anything other than you like a certain tattoo, and you got it on you.”

Anna Bass, instructor of management and business administration, discussed how job seekers should consider tattoos in a competitive job market.

“A lot of people will say, ‘If they don’t like me because I have a tattoo, then that’s too bad for them,’” shared Bass. “Well, if you really want that job, you want to fit into that culture, and you’re the new one coming in. You want to respect the culture that’s there, and if a person is thinking about getting a tattoo, that person needs to think ahead.”

According to Anna Post, an author for the Emily Post Institute, anyone concerned about having visible tattoos in the workplace should consider calling the human resources department.

Casica’s job may entail guiding people, especially those getting their first tattoo, about their tattoo choices.

“They’re not thinking about the impact,” shared Casica. “Sometimes you have to explain to them. ‘Listen, what do you do? You’re a nursing student. I know that nursing students are not allowed to have shown tattoos. Maybe get it somewhere you can easily hide it because you never know what the future’s gonna bring.’”

Gratton advised students to consider the lasting effect of getting a tattoo.

“People talk now about laser treatment,” said Gratton. “For a decent tattoo, it takes six treatments. It could cost several thousand dollars, at least and a year and a half of those different treatments to get that tattoo off. It takes a lot of work to cover one over as well. So, give that a first thought, and the second thought is if you have a worry the tattoo might affect your place on the job market, talk to one of your professors in your chosen major or area. Ask them.”

Casica advocated for judging a person based on performance over appearance.

“It’s no longer we’re tattooing the same ‘criminal element,’” explained Casica. “That’s gone. It’s more people who care about their bodies and what the art on their body looks like. It’s more young professionals. Entire families come in. It’s become a bonding experience. It becomes something to tell someone’s story. That’s what it’s meant to be, and that’s what it’s slowly becoming.”