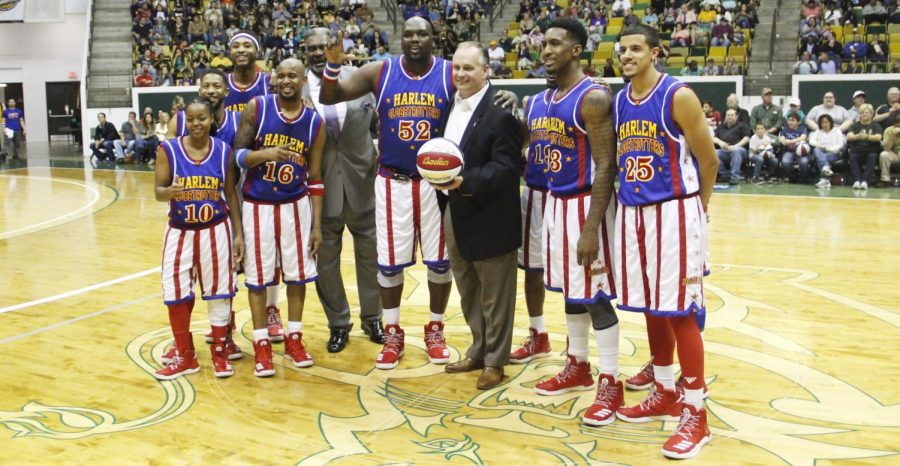 Jay Ladner, head coach of men’s basketball, poses with the Harlem Globetrotters including former player Nate Lofton in the University Center. Ladner aims to help his players reach their full potential as a coach.

With decades of coaching experience, Jay Ladner, head coach of men’s basketball, constructs relationships with his team as he continues to break school records.

Growing up the son of a basketball coach, Ladner felt drawn to his career path at a young age.

“A coach has a very unique ability to influence young men’s lives for the good and can help guide them and mold them into productive members of society and that’s what a coach does,” said Ladner. “I saw my dad do that, and I knew from the time that I was a little fella, that that’s what I wanted to do.”

Ladner first became a head coach at St. Stanislaus College, and after 20 years there, he took on the head coach position at his alma mater, Oak Grove High School, in 2011. He went on to coach at Jones County Junior College where, under his leadership, the team was the first Mississippi junior college to win a national championship. On April 10, 2014, Ladner joined the Lions as the 12th head coach for men’s basketball.

“Coach Ladner has done a great job leading our men’s basketball program,” expressed Jay Artigues, director of athletics. “It starts in recruiting. He is signing young men that are committed to our mission statement of excellence in the classroom, in the community and in competition.”

In Ladner’s first year, the Lions won nine games. Every year, that win total has increased, and last season, Ladner brought the Lions to a 22-12 overall record, the most wins in the program since 2005. The Lions took the regular season championship for the first time in over a decade.

Ladner believes the men’s basketball program has grown in more ways than the number of wins such as increased membership in the Hardwood Club, the program’s financial support group.

“The number of people there has quadrupled since we got here,” shared Ladner. “Number of season ticket holders has grown. The amount of money donated to the program has grown. All the other measurements you can think of have grown in leaps and bounds in the four years I’ve been here.”

“He is a great fit and was exactly what we needed as a head coach,” stated Artigues. “Coach Ladner not only brought in a conference championship, he’s also done a tremendous job in the classroom. Our team GPA has improved each year coach Ladner has been at SLU.”

For Ladner, one of the greatest joys of his job is to see young men develop physically, spiritually and mentally to reach their full potential. Ladner also encouraged his players to excel in their academics.

“Every player I have coached at Southeastern has graduated with a degree, some with multiple degrees,” said Ladner. “I’m very proud of that. We’re one of the very few schools in the country that has a 100 percent graduation rate over the last four years.”

On the court, Ladner focuses on pressuring the other team and making the opponent uncomfortable, and in every aspect, he aims to connect with his players.

“On a personal level, I want to be the type of coach that I would want my own son to play for, and I want to try to treat every player like my own son,” explained Ladner. “We have a very close, tight relationship.”