Reflections by a team captain from Uruguay 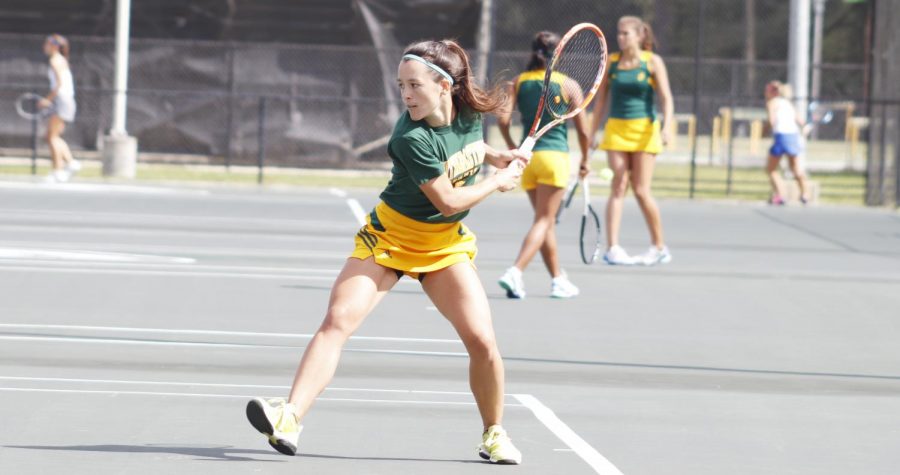 Ceci Mercier, a senior on the tennis team, takes two singles wins at the George E. Fourmaux Cup Invitational that closed the team’s fall season. With five years on the team, Mercier entered a leadership position as the team captain. She began practicing the sport full time at 12 years old and later moved from Uruguay to continue competing at the university.

“I am beyond proud of Ceci and all of her accolades and accomplishments,” explained Hayes. “She has been here for five years and has accomplished a lot over time. She knows how to play, but has worked hard to improve each year she has been here. Ceci is very talented. She also works very hard. You can’t have one without the other, and she fights every time she goes in court.”

Hayes appreciated the effort that Mercier gives during her games.

“She brings a competitive nature to the court that can’t be taught,” commented Hayes. “Ceci always works her hardest and leaves it all out on the line. She works hard and gets the results she wants. It is an absolute pleasure to coach such an amazing athlete.”

With Mercier being a seasoned athlete, Hayes discussed what the team captain provides for the underclassmen on the team.

“Ceci is a great leader that everyone wants on their team,” shared Hayes. “She is one of the girls everyone looks up to on the team. So many players on our team are following the example that Ceci is setting. A positive attitude is contagious.”

Mercier traveled from Uruguay to attend the university.

The senior captain began playing the sport at around 4 years old.

“I didn’t start practicing and dedicating full time until I was 12,” explained Mercier. “I am a very competitive person, and I have always hated to lose. I used to play many sports, but tennis was the sport that I was the best at, and therefore enjoyed the most.”

According to Mercier, the intellectual aspect of tennis is the most enjoyable part.

“My favorite aspect of tennis is the mental aspect that goes behind the sport, my favorite aspect because you not only play against another person but against yourself too,” said Mercier. “Once you enter the court, nobody can replace you. If you are having a bad day, you need to tough it up and get there to fight and overcome the obstacles. It’s very similar to real life.”

Through her time in the sport, Mercier developed more than her athletic ability.

“Tennis has made me grow so much as a person, and I can’t wait to keep fighting with and for the Lions,” shared Mercier.