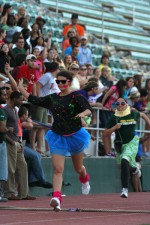 On Tuesday, March 22, Greek Life held their annual Greek games event, sponsored by the Student Government Association (SGA).  Included in Greek Week, the games were part of an overall competition where five teams from up to four organizations participated in three events.  At the end of the week, a winner of the games and an overall winner of the entire Greek Week were announced.

“I thought that the Greek Games were [a] really fun activity for all the Greeks,” said Diana Marcantel, a freshman in the Theta Phi Alpha sorority.  “I had a great time participating in them.”

The evening’s events began at 5 p.m. with a brief introduction to the games and a listing of the three games that were to be held.  First was a dodge ball competition, next was a tug-of-war and lastly was a relay race.  Participating in the Greek games were 19 of the 20 fraternities and sororities:

First was the dodge ball tournament.  Using a two-loss elimination format, teams competed against each other with a sense of pride, respect for others and a great deal of fun.  Some participants though had felt it could have been better with more preparation.

“I thought that it was a little unorganized; most people didn’t know the rules and there was a lot of controversy,” said Josh Gibbs, a sophomore mass communications major.

Each team’s strength was tested next with tug-of-war.  Two teams were pitted against one another in hopes of pulling the other across a certain boundary.  Similar to dodge ball, a team had to reach two losses in order to be eliminated.

To end the Greek games, a modified relay race took the teams through a winding track that took them through five different obstacles.  Beginning with a sack race, the teams then had to hurdle to the next exchange.  Teams then had to spin themselves on a dizzy bat and try and make it to the next station, a wheelbarrow race.  After alternating who was the wheelbarrow and driver, teams had to finally put on a wig, tutu and t-shirt and run to the finish.

With the Greek games complete, all that was left was to see which team had conquered the others.  First place of the games went to the team of Alpha Sigma Tau, Delta Sigma Theta, Kappa Alpha and Zeta Phi Beta.

“We all work as one to try to win overall Greek Week and gain new friends in the process,” said Marcantel.

For more information on Greek Life or the Greek Week events, contact the Office of Greek Life at 985-549-2120 or visit them in the Student Union, room 203.

It was inaccurately stated that the Student Government Association (SGA) sponsered the Greek Games. The office of Greek Life, not the SGA, sponsored the event.