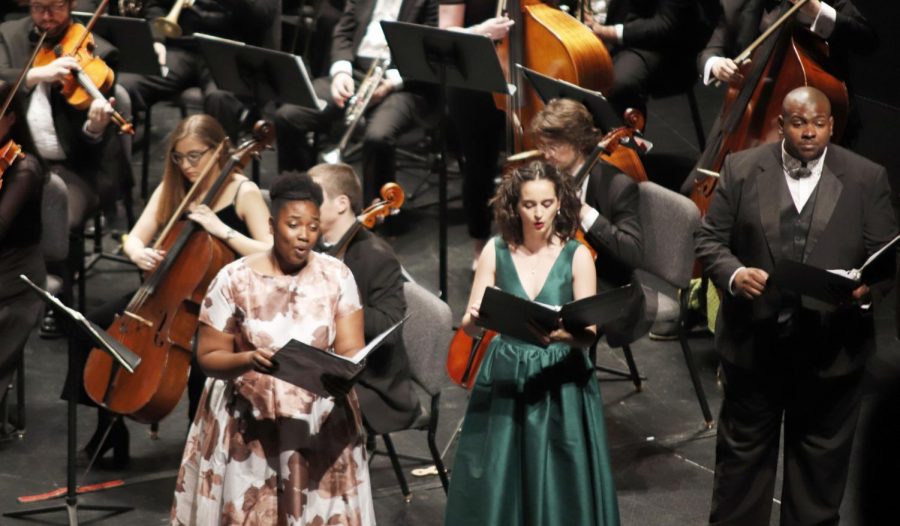 The Southeastern Symphony Orchestra collaborated with Bella Voce, Concert Choir, University Choir and Northshore Choral Society along with Friederike Kienle, a guest conductor, to bring the music of Ludwig van Beethoven to the Columbia Theatre for the Performing Arts.

Kienle discussed her work coming in as a guest conductor.

“It’s a great pleasure,” said Kienle. “We have been working very intensely, and for me, it’s my very first time in Louisiana. It’s great to be here and to get to know this place.”

Anastassia Marr, a member of Concert Choir and University Choir, performed with the symphony orchestra for the first time on “Beethoven Night.”

“It came together really well because being in a classroom, it’s only just the choir people, so to add in orchestra and then our guest conductor was amazing,” shared Marr. “I love her so much. We got to put all that together, and soloists–it was really cool. It was a whole other experience.”

Through the performance, Kienle hoped to convey the power of the music, particularly of Symphony No. 5.

“The 5th symphony is going from darkness to light, from the darkness of catastrophe in the first movement to the light of the glorious and victorious last movement in C major,” explained Kienle. “Those kind of transition going from struggling, falling into the light and succeeding to victory, that is something at all times human beings are struggling with.”

Playing the cello as a child introduced Kienle to music, and now as an international conductor, she enjoys the way music can connect people of different cultures and mentalities.

“By doing this, music helps us connect without words,” stated Kienle. “Here I can talk, but sometimes I really don’t speak their language. We all communicate through music, and you get so close to the people than you would be able as a tourist for example.”