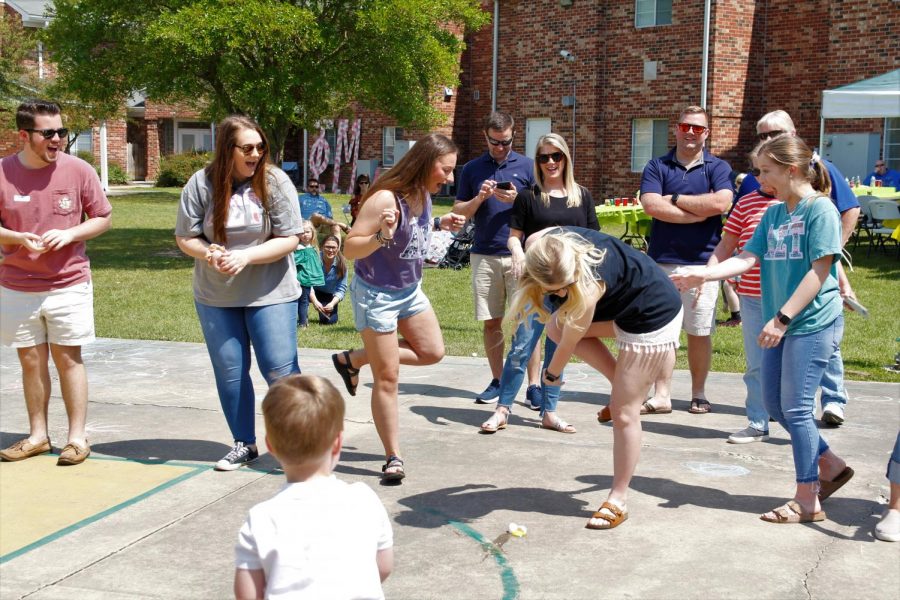 During the afternoon, attendees of Alpha Sigma Tau's "Backyard Family Day" were invited to play an egg toss game.

Family and food were at the heart of Greek village this weekend.

Alpha Sigma Tau Sorority held “Backyard Family Day” on Mar. 23 from 11 a.m. to 2 p.m. at the chapter’s sorority house. Relatives were invited for an afternoon of food and games.

Paige Modicut, chapter president of AST, explained that in the fall, the sorority participates in a tailgate before football games. In the spring, the focus is geared towards family.

“It’s just more to get the parents involved in our organization because they contribute to us,” said Modicut.

In the afternoon, the sorority hosted three-legged races and egg toss events.

Brenna Satterfeal, a member of AST, thanked her sorority sisters to help her with the ideas for the event. She shared that the afternoon games were a success.

“I think it’s a wonderful event,” explained Rispone. “You can tell that its family-oriented, and family’s very important.”

Modicut was happy about the turnout of the event.

“This is the exact amount of people that said they would come,” said Modicut. “As long as their families want to show up, we are very happy with everybody that’s here. Everybody’s having a good time, and everybody likes the food.”