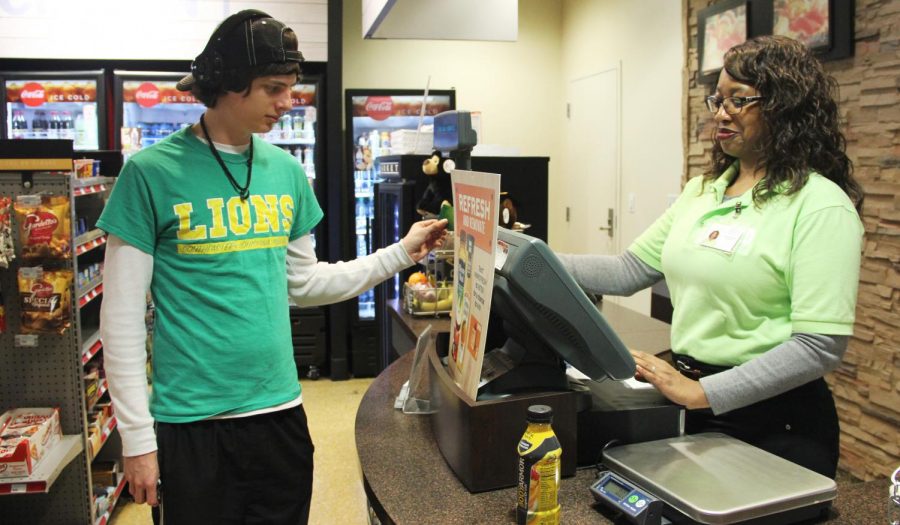 Evan McCann, a freshman information technology major, purchases food from Yolander Henderson in the Student Union Market. Lion’s Lagniappe can be used on and off campus whereas Cub Cash only works on campus.

“The primary difference is that Cub Cash is tied to meal plans and can only be used at campus dining facilities, and Lion’s Lagniappe is a debit account that can be used at a number of locations on campus and off campus,” shared Robin Parker, marketing and strategic initiatives director at the Office of Auxiliary Services. “The accounts are not interchangeable.”

Resident students are required to have a meal plan. All plans include Cub Cash, which may be spent at any dining facility on campus. Cub Cash may also be used at campus convenience stores like the Mane Market or the Union Market.

“Because Cub Cash is tied to meal plans, Cub Cash can only be used at campus dining facilities,” explained Parker. “No other locations on or off campus can accept Cub Cash as a form of payment.”

All meal plans are per semester and are not automatically renewed. For resident students, the Cub Cash balance expires at the end of the spring semester. For commuter students, Cub Cash rolls over until used, or until a meal plan is left dormant for over a year.

“I really like Cub Cash because it allows students to have other options besides the cafe, and not have to spend money out-of-pocket or use extra money that they could use for extracurriculars or something outside of school,” shared Viator.

“I like Cub Cash just because it lets me buy whatever food I want,” shared Martin.

Lion’s Lagniappe allows students, faculty and staff to use their university ID to make purchases on campus and at participating off-campus merchants. Albertsons Grocery, Eddie’s Famous Frozen Custard and Pita Pit are among the businesses that accept Lion’s Lagniappe.

Campus Card Operations representatives meet with members of the Student Government Association, student advisory boards and other focus groups for suggestions of local businesses to add to the list of off-campus participants.

“While we look into all suggestions, some corporations such as Walmart, Dollar General, etc. do not allow their local stores to participate in such a program,” said Parker. “We are always pursuing opportunities with local merchants to have Lion’s Lagniappe accepted as a form of payment.”

Lion’s Lagniappe can also be used at on-campus dining facilities.

“Lion’s Lagniappe has nothing to do with meal plans, but can be used to make purchases at campus dining facilities for anyone without a meal plan,” explained Parker.

“Per state law, sales tax is not charged for meal plans or any component of meal plans, which means when Cub Cash is used as a form of payment for campus dining products, the buyer does not pay sales tax,” said Parker. “There is a sales tax charge for Lion’s Lagniappe purchases including any made at a campus dining location.”

CORRECTION: The article initially stated that Cub Cash was accepted at all dining facilities on campus except the Mane Dish. This statement has been amended because the Mane Dish does accept Cub Cash. – April 4, 2019.