Hayes reflects on 16 years in tennis 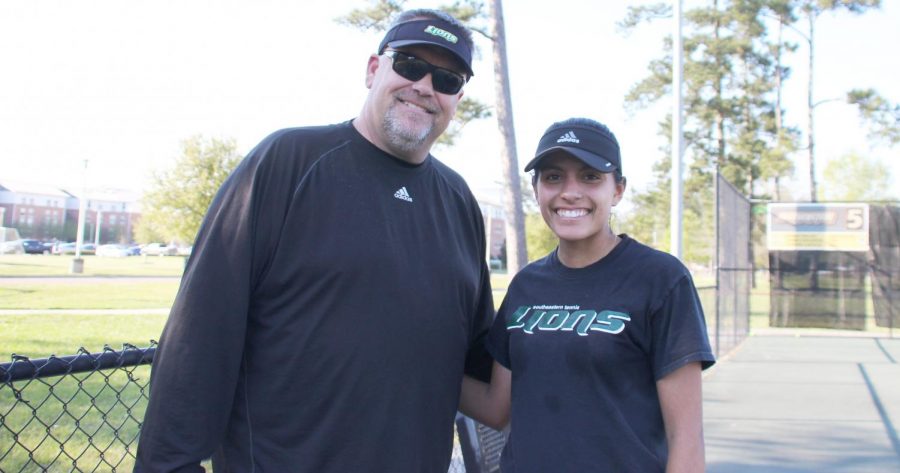 Jason Hayes, head coach of tennis, left, and Katya Cornejo, a sophomore international student on the tennis team, right, take a break during practice. Hayes has been coaching tennis for 16 years and has eight Coach of the Year Awards.

In 16 years of coaching the Lady Lions, Jason Hayes, head coach of tennis, secured eight Coach of the Year awards.

In addition, Hayes represented the university at the NCAA and coached internationally. At the university, Hayes’ current record sits at 312-231.

“I’ve never pursued anything for myself,” stated Hayes. “The awards I won are due to the fact that I have great kids playing for me, and when we’re successful, it makes it even more enjoyable.”

Though winning can feel good at times, Hayes placed the true value of his profession in making memories with the student-athletes.

“Winning is great, and representing Southeastern in the NCAA is a great feeling, but when they write me five to 15 years later about all the good times and memories we made, that to me, is the real joy of this profession,” shared Hayes.

Hayes influenced both Katya Cornejo and Kirsten Caldwell to join the Lady Lions.

“When I came to visit, I just loved the atmosphere here,” explained Cornejo. “The relationship between the girls and the coach showed me that here we are more a family than just a simple team, and that was a really important factor of why I decided to come.”

Caldwell described her experience with Hayes as a coach.

“His sense of humor is a strong part of his personality,” shared Caldwell. “However, underneath is a caring interior. I believe the team thinks of him as a mentor.”

With eight international students on the roster, Hayes enjoys the team’s diversity.

“I love the interaction between the girls,” stated Hayes. “We all have tennis in common, and that is the glue that makes us feel comfortable with each. Sometimes there’s a language or a cultural barrier, and you need to work through that and find common ground to build on.”

Hayes shared his ultimate goal for the team.

“I want my players to look back on their time at Southeastern as the best years of their life,” said Hayes. “I want them to get a degree and look back on all the memories and smile.”

Caldwell hopes to make more memories with the team.

“My favorite moment of coach Hayes was when he took us to Texas de Brazil for a team dinner,” shared Caldwell. “He paid attention to his players’ dietary restrictions by recommending the salad bar. This showcases the fact that he values quality and is generous.”

To further his goal of creating memories that will last longer than a season, Hayes plans to stay with the team for a while.

“I absolutely love Southeastern,” stated Hayes. “We have a great administration. The program is very well supported, and it gets better each year. This is a great place to work.”