A look into Greek Week 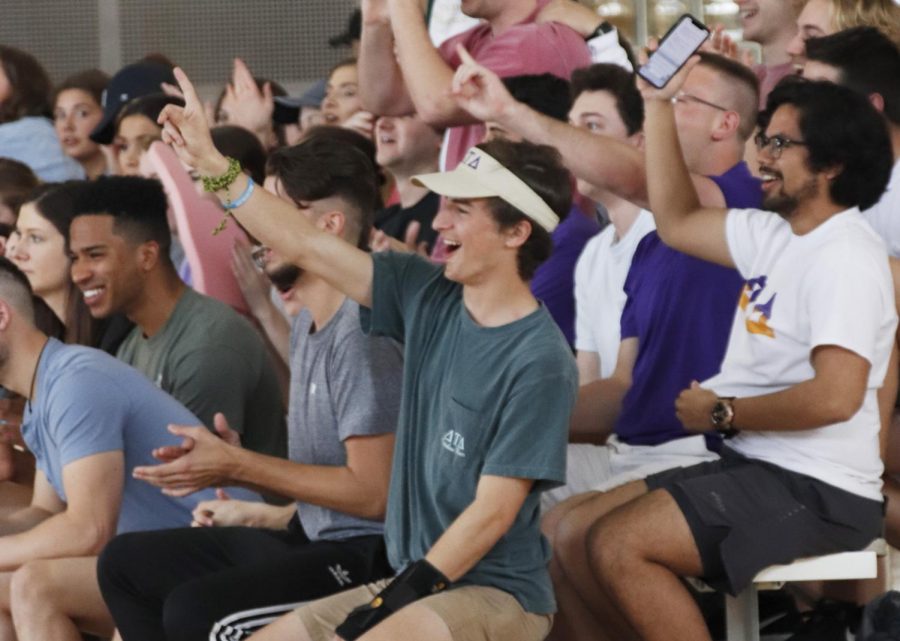 Members of Greek life cheer on their teams. Greek organizations compete in the annual Greek Week through activities like dodgeball and a step show.

Members of Greek life can look to compete and make connections in the annual Greek Week.

Greek Week is scheduled for March 31 to April 4. This year’s theme for Greek Week will be “Greekelodeon.” Greek organizations will participate in a step show centered around a Nickelodeon show.

Karley Bordelon, a junior social studies education major and a member of Phi Mu fraternity, discussed what she looks forward to for the weeklong competition of Greek organizations including a cook-off, battleship, dodgeball, Greek trivia and step show.

“Greek Week is so much fun because you get to hang out and spend time with so many different Greek students that you don’t get to see on a regular basis,” shared Bordelon.

For Taylor Mangus, president of Order of Omega, the best part of Greek Week is seeing connections form between members of different organizations.

“Greek Week is one of Southeastern’s greatest tools for fostering and strengthening relationships between sororities and fraternities,” expressed Mangus. “I love the traditions associated with Greek Week, so it was important to me that we keep some past competitions that are always a great time, like volleyball and dodgeball, while also incorporating new events such as battleship and a tailgate for the baseball team.”

Mangus shared the preparation that goes into holding Greek Week.

“My team and I started preparing for Greek Week this past December at a retreat where we mapped out exactly what events we wanted to incorporate and the best way to spice things up,” said Mangus. “It has taken us about four months of planning to put on a, hopefully, successful Greek Week.”

Cameron Pigeon, a senior health education and promotion major and a member of Delta Tau Delta, explained the points system for Greek Week.

“It gives each organization a chance to create better relations with other Greek organizations on campus and allows us to meet people that we otherwise may not have had the chance to meet,” stated Pigeon. “Each day, there is a different event. Coming in first rewards you with five points. Second rewards you with three, and third place rewards you with one point. The points are tallied and then an overall winner is crowned at the end of the week.”

Order of Omega encouraged all Greek organizations to stay safe during Greek Week.