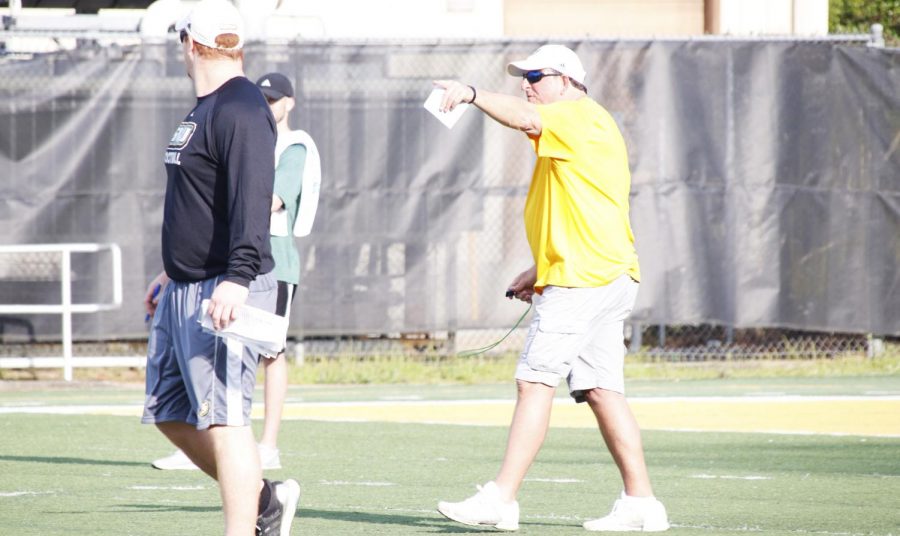 Frank Scelfo, head coach of football, teaches his players various plays at practice. The football team looks to build off of its 4-7 overall record from last season. Scelfo joined the Lions in 2018 following over 30 years of experience coaching the sport.

With over 30 years of coaching experience, Frank Scelfo was hired in January of 2018 to become the university’s 16th head coach of football.

Beginning his second year at the helm of Lions football, Scelfo’s coaching career extends beyond his time with the university.

“This will be my 37th year,” said Scelfo. “I been at every level. I started coaching at junior high. I coached in the NFL and everything in between from high school to junior college, Division I, power five group and now at the FCS level.”

For Scelfo, family led to his passion for football and to his pursuit of a career in the sport.

“My dad was a coach,” shared Scelfo. “I grew up in the coaching community, and I was at practice from the time I could walk. I was either at a football practice or a baseball practice or basketball practice. That’s just what we did as we had eight kids growing up.”

Throughout his tenure as a coach, Scelfo has made it a point to keep his players on the track to success.

“He’s a players’ coach,” stated Schwebel. “He loves interacting with all of us, and you can go in his office and ask him questions. He’s always there for you and loves to talk to each of us. Even if you mess up, he wants you full speed doing what you can to make the plays and help the team. We go by three rules: to protect the team, be on time and no whining or complaining.”

Isaac Adeyemi-Berglund, a senior linebacker, shared how his character and attitude have improved due to Scelfo.

“He’s helped me become a better man,” said Adeyemni-Berglund. “He’s helped me become more responsible and more accountable for things in my life, whether that be the little things. He has a saying, ‘The way we do small things, the way we do all things,’ and it’s really helpful whether you just woke up and have to make your bed in the morning, or you have a test, and you have to study and be prepared.”

In the future, Scelfo hopes to see a rise in fan attendance to support the team at home games.

“I always feel the home crowd gives us such a huge advantage,” stated Scelfo. “We signed 21 high school players this year, and 20 of them are right here from southeastern Louisiana. People have to realize Strawberry Stadium on a Saturday night can be electric. We have a great product for our fans and the university. It’s a great atmosphere, and it’s fun.”

Scelfo reflected on the true importance of coaching in any sport.

“Coaching is coaching, and players want to know that you care about them,” expressed Scelfo. “You want them to reach their maximum ability and to be able to do the things that they want to be able to do. They have goals and dreams too, so we want to try to help them realize that.”