Dating takes a page from the playbook 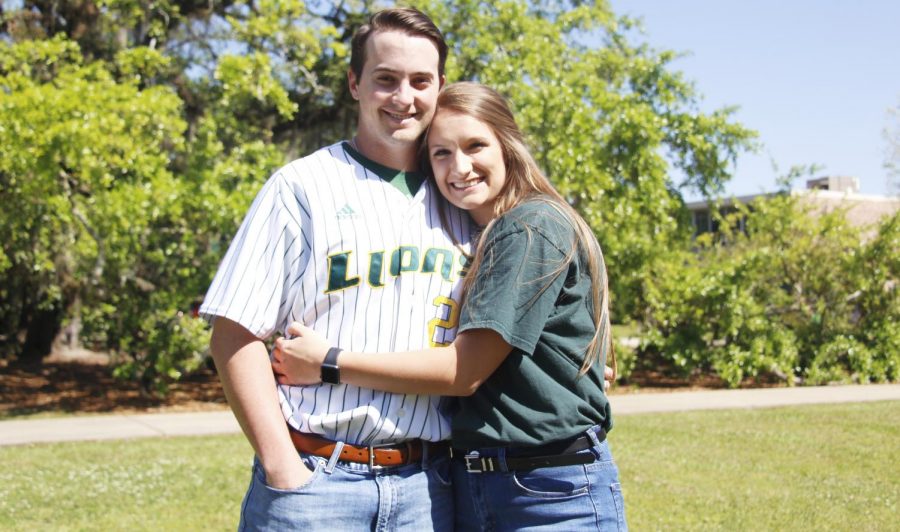 Carlisle Koestler, a senior pitcher, and Jenna Bordelon, a junior nursing major, pose for a picture in Friendship Circle. They began dating about two years ago and have managed the time commitments of athletics.

Beyond balancing academics and sports, athletes’ schedules can find room for managing a social life, including dating.

Anna Watkins, a senior psychology major, met Cole Stevens, a senior chemistry major on the rugby club, at Loranger High School, and they began dating in April of 2014. Watkins discussed the scheduling difficulty of dating an athlete.

“We both are full-time students, work two jobs and are involved in extracurriculars and on-campus organizations,” said Watkins. “The athletic schedule is especially demanding because of its competitive nature, and he tends to prioritize rugby within the top few to-do’s of his day-to-day schedule.”

Jenna Bordelon, a junior nursing major, started dating Carlisle Koestler, a senior pitcher, in March of 2017 after meeting through a mutual friend on the baseball team.

For Bordelon, time conflicts do not present much trouble.

“Although his baseball schedule can be a lot sometimes, I also am very busy with school, work and being in a sorority, so it works out really well,” shared Bordelon. “On weekends when he travels with the team, I use that time to do homework or study or even go home to see my family. Sometimes games and practices will interfere with events, but that doesn’t interfere with our relationship one bit. I go to most of the home baseball games, and we get to see each other after the game is over.”

“The hardest part is watching him play this high contact sport with no protection on his person,” explained Watkins. “In football, he wore a helmet and pads, but rugby is the same intensity and roughness but without the protection. I hate seeing him out there tackling and getting tackled up, and I often worry that he will break a bone or get a concussion.”

From having two older brothers who played baseball to being involved in softball, track, cross country and cheerleading in high school, Bordelon is no stranger to sports.

“I understand the reason for all of the long practices, early morning workouts and weekends away from family,” expressed Bordelon.

According to Bordelon, not many differences distinguish dating an athlete or a non-athlete though baseball’s summer format can pose a challenge.

“A lot of the baseball players will go play summer ball out of state,” shared Bordelon. “I personally know how hard this is when your boyfriend leaves for months, and you don’t know a certain date on when he will return. That is something that I usually don’t see with someone dating a non-athlete. I also see most couples hanging out every weekend, but sometimes I don’t get to do that during the season when the team has a weekend series out of state.”

Watkins has never dated a non-athlete, but her friends have indicated differences.

“A lot of my friends point out that my guy is very intense, intimidating and driven in comparison to their guys, and I would definitely credit that to his lifetime of competitive sports,” stated Watkins.

Regardless of any trouble or difficulties that can arise while dating an athlete, the experience can be rewarding.

“The thing I like most about dating a baseball player would be sitting with all of the other players’ girlfriends at most of the games and cheering on our favorite team,” said Bordelon.