A Greek test of knowledge 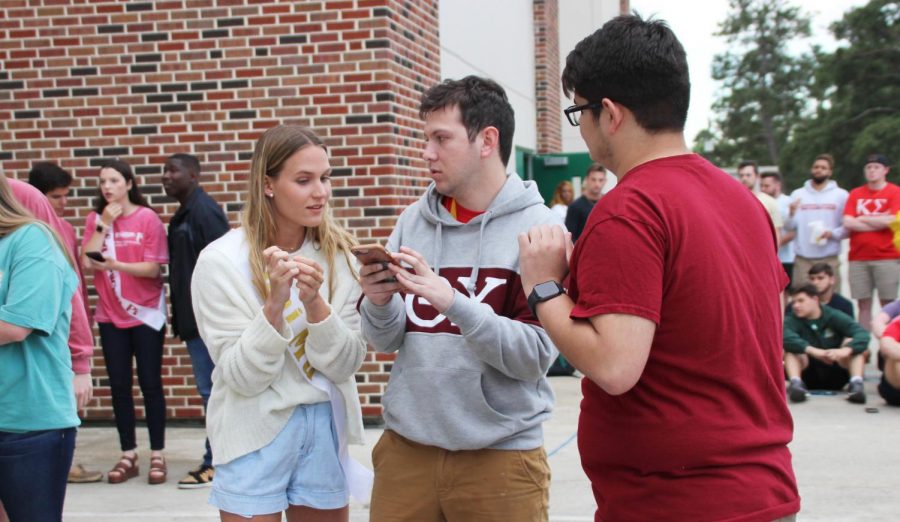 Team answer questions about Greek life and Nickelodeon shows for "Greek Trivia." The competition was included for its first year in this Greek Week.

Greek organizations gathered to test their knowledge for “Greek Trivia.”

The contest was held at the parking garage on April 3. Each team chose three members from different chapters to compete. The “Fairly OddParents” team took first place. The “Jimmy Neutron” team placed second while the “SpongeBob” team placed third.

Emily Whittington, a senior kinesiology major and a member of Order of Omega, explained why the event was added to Greek Week this year.

“Last year, we had the Greek games, so I feel like every other event in Greek Week is something for people who are really athletic, and I’m not,” said Whittington. “So, that’s why I wanted to do something like ‘Greek Trivia’ for the people who are always stuck in the books a chance to show their skills too.”

According to Whittington, the event also helped all the chapters learn about each council’s history. In the game, each team had one phone and participated using Kahoot! while a projector showed the questions.

Mason Miller, a junior finance major and a member of the “Fairly OddParents” team, discussed his selection to compete.

“The reason I think my brothers chose me to do this is because we thought they were going to ask a lot of Southeastern questions, and if that was the case, we felt like I was the best one,” shared Miller.