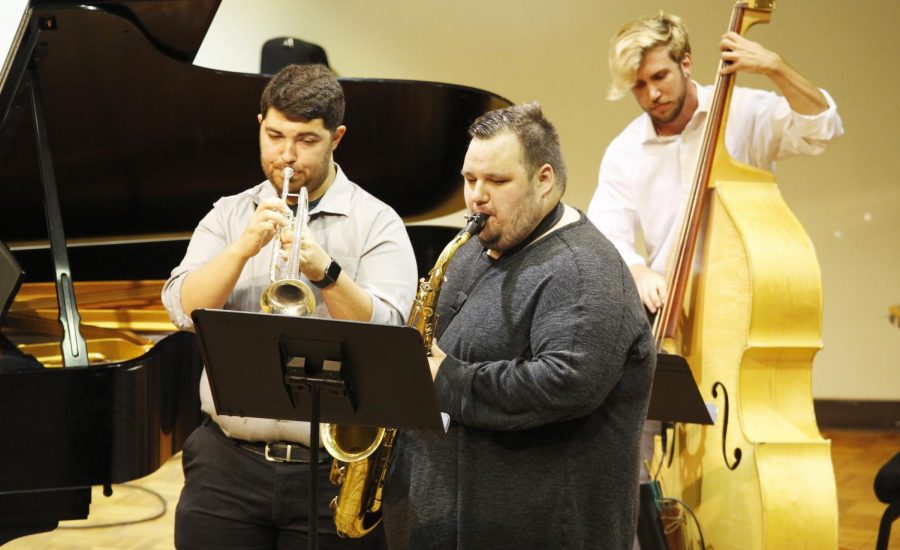 The "Bill Evans Jazz Festival" features concerts by alumni, faculty and student ensembles. This year, the guest artist will be Pete Rodriguez.

The 18th annual “Bill Evans Jazz Festival” will celebrate the 60th anniversary of the “Kind of Blue” album by Miles Davis.

Michael Brothers, instructor of jazz studies, percussion and drumline, described the album as one of the most important jazz recordings of all time. Evans, a 1950 alumnus and seven-time Grammy Award winner, worked on the album with Davis.

“Eight years after he graduated from Southeastern, he was working with Miles Davis,” shared Brothers. “He spent about eight months with Miles, then left his band. Miles asked him to come back to work on the ‘Kind of Blue’ album, and Bill played on four of the five tracks and contributed two of the compositions. One is an original. The other one is the one he co-wrote with Miles, and still to this day, 60 years later, it’s the number one selling jazz album of all time, over five million copies sold.”

The festival is scheduled to begin on April 10 with the Alumni Jazz Ensemble concert in the Pottle Annex Recital Hall at 7:30 p.m. Ron Nethercutt, a former faculty member, will return for the festival.

Brothers said, “He’s very popular with a lot of the music alumni that played in his groups back in the ’70s and ’80s, so they’re very excited to work with him again, and I was able to talk him into coming back one more year, so this will probably be the last year he directs the alumni band.”

The Contemporary Art Gallery will host a “Bill Evans: Kind of Blue” exhibition on April 10-18. The Jazz Lab Band will bring another performance to the Pottle Annex Recital Hall on April 11. The Louisiana Association for Jazz Education State Jazz Festival will feature competition among middle and high school jazz ensembles for April 12-13.

Pete Rodriguez, guest artist, will perform on April 12 at 7:30 p.m. with the Jazz Faculty Trio, which will recreate the “Kind of Blue” album, and again on April 13 with the Jazz Ensemble to end the festival. On April 12-13, he will also teach a masterclass.

“He has kind of an interesting musical history,” stated Brothers. “He was there growing up in New York at the birth of the hip hop era. In his early teenage years, he got very focused on classical trumpet, and at the age of 15, he performed at the National Symphony of Puerto Rico.”

“He served some time in the United States army and got bitten by the jazz bug, and that’s been the focus of his playing ever since,” explained Brothers. “His albums are very unique. He’s got a very unique combination of Latin and jazz styles.”

Brothers encouraged everyone to check out the concerts. The festivities are free for university students.

“Jazz is America’s only native art form,” shared Brothers. “The other art forms that we have originated in some other place in the world. Jazz is the only thing that’s uniquely American. That’s our contribution to the world, so I’m always encouraging people to support our national art creation.”