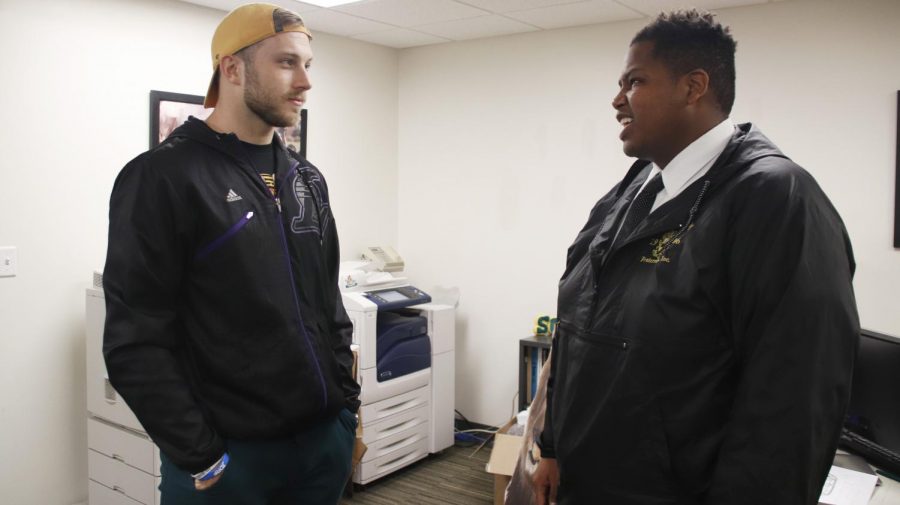 Johannes “Joey” Verhaegh, a graduate assistant for Multicultural and International Student Affairs and a former member of the Lions football team, left, speaks with Richard Davis Jr., president of the Student Government Association, right. From their position in the public, athletes can find their voices bringing attention to political topics.

From Colin Kaepernick, a former National Football League player, to Lindsey Vonn, a World Cup alpine ski racer, professional athletes can find their positions in the public lead to discussions about their political opinions.

Whether for good or bad, Tanner Wright, a junior pitcher on the softball team, believes athletes can use their positions to influence others.

Wright said, “Athletes have a big stage, and a lot of people look up to them, especially younger kids that want to do that same thing that they do, and there’s been a lot of athletes that have used it for good in sharing their faith or sharing to raise awareness of disease or charities, causes, stuff like that, and there’s some that don’t use it for the right purposes.”

Through social media, people can find value in athletes’ opinions.

“Whether it’s because you just think they’re experts or not, people take the weight of the athlete when it comes to their opinion on politics,” shared Johannes “Joey” Verhaegh, a graduate assistant for Multicultural and International Student Affairs and a former member of the Lions football team. “Maybe you view it as the halo effect where you see someone’s good at one thing, maybe they’re good at everything, so you value their opinion more because that happens a lot in the public.”

This platform can stir conversations and bring attention to the subject.

“When a professional athlete, say LeBron James, says something about the president, a lot of people take that, and whether they agree with it or disagree with it, it becomes a talking point,” explained Verhaegh. “It becomes a conversation for people, so the voice provided by being a world famous athlete lends to the spreading of a conversation or the increased awareness of different things political.”

Caitlyn VanHemelryck, a senior pitcher on the softball team, discussed the impact of athletes’ involvement in political topics.

“A lot of athletes who believe in God and believe in Jesus express that and show it through their sport, and after every big game that they have, they praise God,” expressed VanHemelryck. “They say all the talents that they have is because God gave it to them. That’s who they play for, and it’s not because of them. It’s because of Him, so I think it’s really important.”

Wright cited an example of athletes becoming involved in something beyond the sport itself.

Wright stated, “I watched an article on how when Tim Tebow put his Bible verses on his face, millions and millions of people would view that and go Google it and stuff, and that’s just one example, but again, there’s a ton of people looking up to athletes, and just the way that they use their influence on people, it’s a big deal.”

Beyond using their positions to voice their opinions, some athletes decide to become politicians such as Cory Booker, senator of New Jersey.

“It’s a small percentage of people that do it, but of the ones that do it, they use that as the leadership qualities they learned in athletics and their name recognition to springboard them into politics,” shared Verhaegh.

Wright described the relationship between politics and athletics as a fine line.

“Politics can be such a controversial issue, and so it needs to be handled with care on a professional level,” said Wright. “So, there’s a time and place for that kind of stuff, so it’s important to know where you stand and what you’re dealing with.”

For Wright, the connection of the field to politics is not far off for student-athletes.

“As a college athlete, even though we’re not professional athletes, we still have a pretty big platform,” explained Wright. “We can share a lot of things. It’s important as college students that we recognize that and keep our priorities in line.”