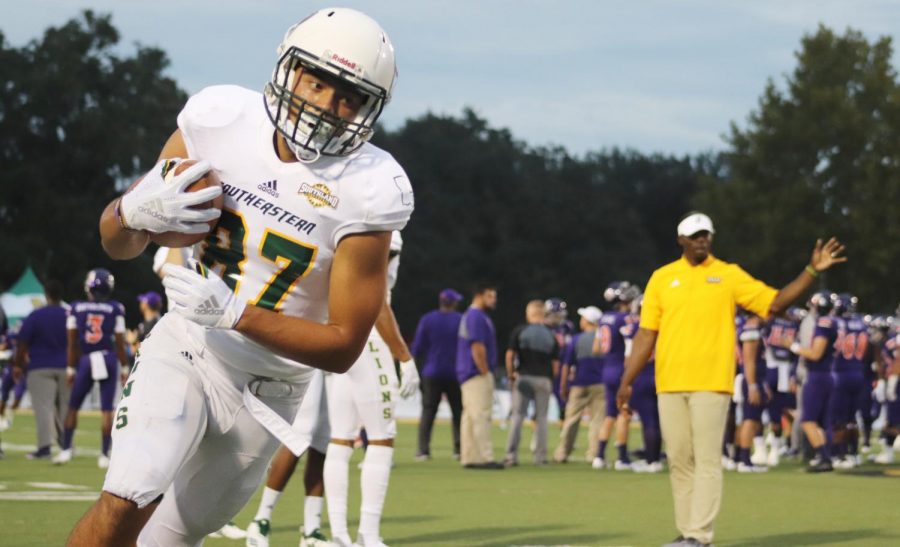 Football players sharpen their skills during a pregame warm up. Over the summer, athletes continue their practice regimen to prepare for the next season.

When the school year ends, many student athletes prepare for summer practice routines.

Football players are among the student-athletes who practice during the summer months. Their workouts may vary in frequency and duration from regular season and from each other, but each athlete has goals and exercise strategies.

For Chason Virgil, a senior quarterback, summer offers the chance to focus more on personal goals.

“Summer is the time for us football players to really focus on ourselves and try to reach goals that we want to reach before the season starts,” shared Virgil. “You have so much time on your hands. It’s different from football season where it’s school and then straight to practice, and you really never have a lot of alone time to work on things you want to work on.”

Virgil plans to use the summer vacation for conditioning and to sharpen his skills.

“For me, playing quarterback, I focus on a lot of footwork drills that help me throughout the season,” said Virgil. “Obviously, throwing the ball a lot. So, it’s accuracy. In the weight room, focusing on trying to get stronger every week. That way, I can last throughout the season. My body won’t fail me. Really just footwork, throwing the ball, getting my arm stronger, and try to run as much as possible to have my wind up and have some speed.”

Isaac Adeyemi-Berglund, a senior defensive lineman, will be returning home to Canada during the summer.

Adeyemi-Berglund believes working out by himself is harder than exercising with his teammates.

“I try to work on my mental toughness to push myself as far as I can push myself by myself,” said Adeyemi-Berglund. “Because it’s a little bit harder to push yourself by yourself instead of the whole team being around or a strength coach telling you where to run and how fast to run and how much time you have.”

As a defensive lineman, the skills Adeyemi-Berglund wants to focus on differ from Virgil.

In addition to conditioning himself to withstand the southern heat, Adeyemi-Berglund plans to improve his discipline.

“I want to work on my discipline through field work drills or hand drills or feetwork,” explained Adeyemi-Berglund. “I really want to work on my discipline, whether if it’s a zone read play, stay on the quarterback, keeping my feet straight, keeping my feet flat, being able to control myself and not play too instinctual, play a little bit smarter.”

Some athletes believe summer practices can be tougher than regular season practices.

“In the season, you’re practicing all week, preparing for a team, but then in summer, you’re going against each other every day,” said Schwebel. “You get tired of that. When you get a new opponent every week it’s easier, to me. During fall camp, they figure you out because they practice against you every day. When you play another team, they get one shot at you, or one game, to see what they can do against you. They don’t really know what you can do.”