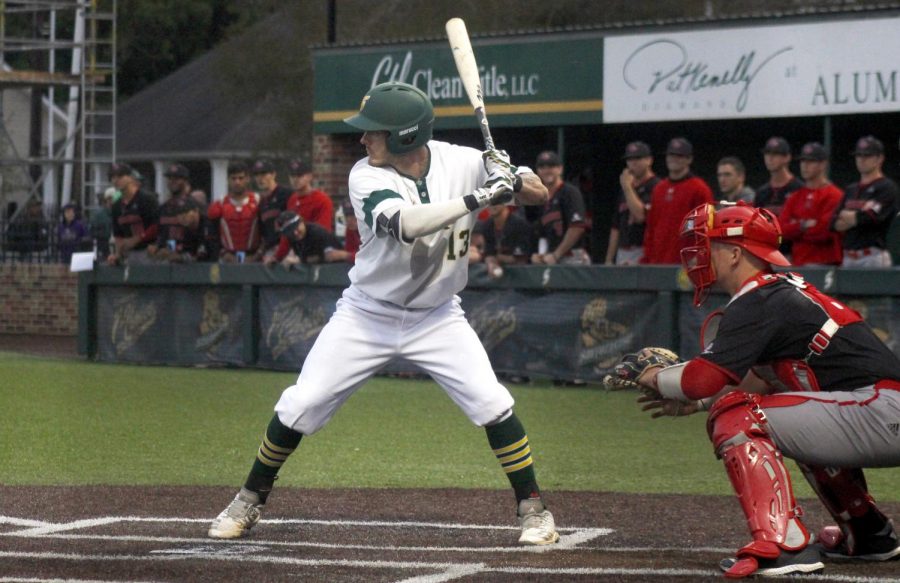 Brennan Breaud, a senior infielder, prepares to swing in the Pat Kenally Diamond at Alumni Field. Before graduating this semester, Breaud made it into the Top 10 in all-time hits for the university.

Cracking into the top 10 in all-time hits for the university was how Brennan Breaud, a senior infielder, wrapped up his final season.

Breaud earned 55 hits across 60 games, earning 22 RBI’s in the process.

Breaud was not focused on the record books during the season but focused on performing his best on the field.

“It felt pretty good to do something like that,” explained Breaud. “I heard some people talking about it a couple weeks prior, but I was just focused on trying to get us wins and make the team progress. We were just trying to keep this thing rolling because we have been hot lately.”

According to Breaud, when he signed with the university, he never anticipated breaking into the top 10 in all-time hits.

“It was not even in my head when I first committed,” stated Breaud. “I didn’t know anything about it. I heard when I had 100 hits, but I did not keep count. It felt cool to get up there with some of the greats who played the game here. It’s an honor, and I’m just blessed to keep playing games for Southeastern.”

Breaud stated that this accomplishment is among his top three moments as a Lion.

“I got a standing ovation,” shared Breaud. “My close ones that knew me congratulated me. My family was very proud of me, and it felt good to do it. It felt real good, and I’m just trying to keep this thing going and trying to win a conference championship.”

“When he first stepped on campus we told him that we didn’t play favorites,” stated Riser. “We had some upperclassmen when Brennan first arrived on campus, and he had to work his way to the top. He played all four years, so we thought he had a pretty good shot at getting into the top 10. We play who we think can get us to the next level. He did a good job grinding and earning his spot amongst those guys. I am glad in everything he has done for the team.”

Riser talked about what the ultimate goal is this season and what the team wants to accomplish as a whole.

“It’s good that Brennan got into the top 10 but we have a different goal as a team,” stated Riser. “Obviously, the goal this season is to fight and compete for the Southland Conference Championship. I know he would trade all the accolades in for a team championship. He came back and told me that ‘Alright coach, let’s get this thing done.’”