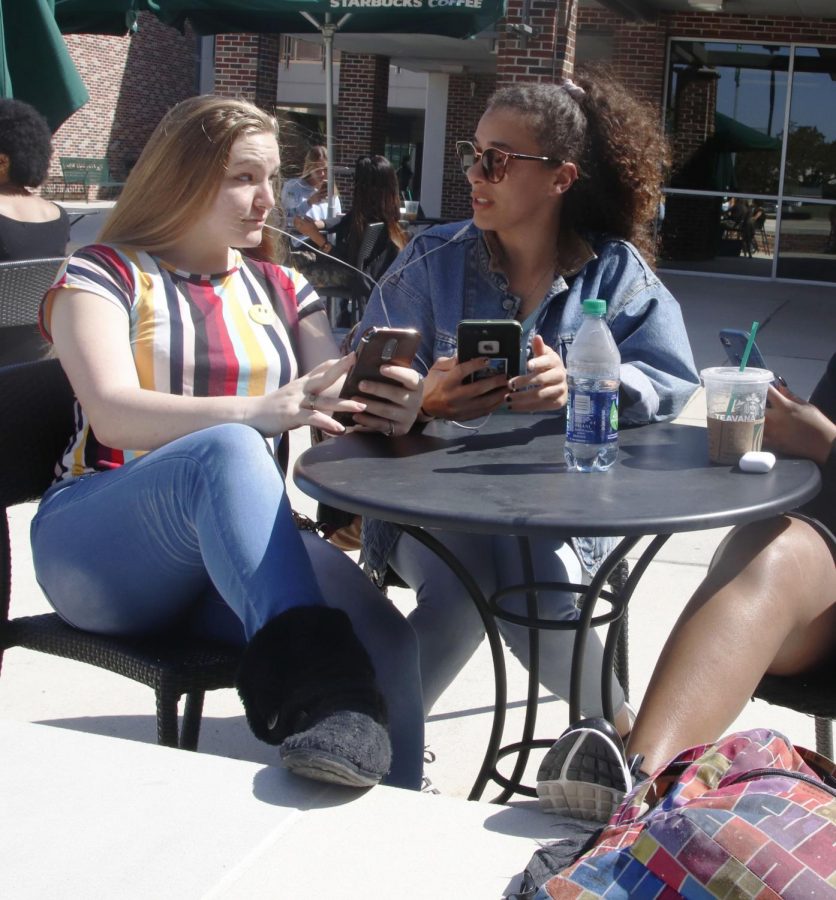 Students share headphones to listen to music. Music is a common study device used by students, but opinions on which music works best differs between people. Research has shown positive outcomes for listening to music while studying.

Students tend to turn to music to improve their focus and increase attention span during study sessions.

Research has shown that music improves study environment in many aspects.

An article “Is it Good to Listen to Music While Studying?” by Nicky Davis at discusses the positive effects that music has on students when studying.

“Study music, particularly, can be relaxing and help students beat anxiety or stress while studying,” stated Davis. “Music can help with memorization – a somewhat debatable idea that is the basis of ‘The Mozart Effect’ which suggested that listening to Mozart study music could actually enhance intelligence.”

Alyssa Dagastino, a sophomore criminal justice major, prefers calming music to create a relaxing atmosphere when they feel overwhelmed with their course work.

“I honestly love listening to soft waves or rain sounds on Spotify while I am studying because it makes me feel more at peace about trying to complete a million different assignments at once,” shared Dagastino. “I would definitely recommend a soothing playlist to listen to while doing schoolwork.”

A study “Music and health” published by the Harvard Medical School, music influences the brain. Music affects cognitive functions in general. The article explained that, “listening to music helps organize the firing of nerve cells in the right half of the cerebral cortex, the part of the brain responsible for higher functions.” Music acts as an exercise for the brain. The study also said that learning to play an instrument could enhance, “the brain’s ability to master tasks involving language skills, memory and attention.”

Lauren Ringo, a sophomore psychology major, expressed that non-lyrical songs helps her as it does not distract her with lyrics.

“When I’m studying, I most likely have classical music playing in the background,” said Ringo. “It keeps a slight distraction so that you can work longer, and because it doesn’t have any vocals, you don’t sing along when you are focusing.”

Students also see improvements in classes because of this study technique.

“I really listen to everything, but it has to be music that you don’t know so that you don’t sing along with it and can focus more,” shared Donnie Kogel, a junior kinesiology major. “This has shown in my theater class because when I listen to music, it helps me memorize my lines with the beat that goes along with what I’m saying.”

Samantha Messina, a senior fitness and human performance major, shared that listening to calming music does not keep her as stimulated while studying.

“I listen to the same music that I like to work out to so that it puts me in a more upbeat and motivating mood to study,” said Messina.

The article “Is It Good To Listen To Music With Headphones On While Studying?” published by ArkarTech, explained how the brain functions when listening to music.

“The activation of the brain’s language centers leads to an interconnection between the reading and the lyrical processing,” stated ArkarTech. “Numerous types of research have shown that individuals are likely to recall the information in those environments that are similar in which the information was learned.”