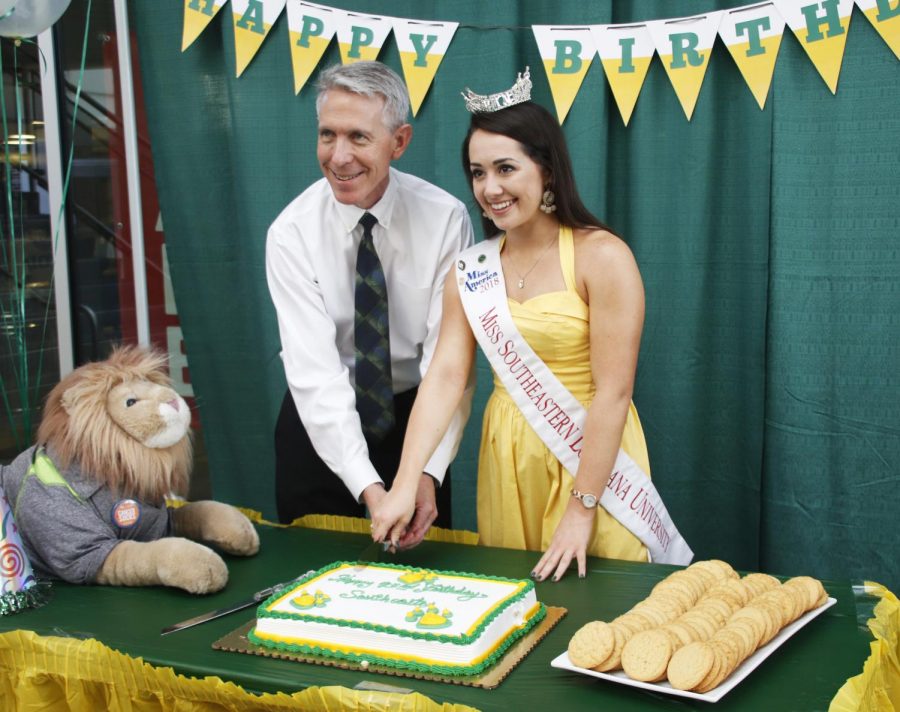 Dr. John Crain, president of the university, cuts cake with Miss Southeastern 2018 Alyssa Larose during the university birthday celebration organized by the Campus Activities Board. The institution that began as Hammond Junior College in 1925 will turn 94 this year.

The institution that began as Hammond Junior College in 1925 has grown over the past 94 years to become Southeastern Louisiana University.

After facing the impacts caused by the catastrophic Hurricane Katrina, the university has achieved several milestones during the past decade. The university has been under the leadership of Dr. John L. Crain, and currently has 14,308 students enrolled.

There were some important events that shaped the financial institution to be what it is today. Some of the historic events includes the approval of GRAD Act agreement by the Louisiana Board of Reagents in the year 2010, 100% online nurse practitioner program offered since 2011, and the university football team winning the NCAA playoff game for the first time in school history in the year 2013.

Crain admitted that even though the budget cut and the approval of the act placed a financial burden on students, the situation allowed the university to learn how to manage resources efficiently at the time of the financial hiccup to continue to provide good experiences for students.

“I guess you can make an argument that it is a good thing that at least it gave us that avenue to maintain resources at a time when the state was reducing resources but it was not what is was originally intended to be,” explained Crain. “What was originally intended and portrayed to the university was an opportunity to get more resources, so that we can do more for our students.”

There has been major milestone in terms of physical infrastructures. The War Memorial Student Union was reconstructed in the year 2014. Computer Science and Technology Building was opened on campus in 2017 and two new residence halls, Ascension Hall and Twelve Oaks Hall, with 220 geothermal wells situated underground were opened in the year 2018. The residence halls are the second largest site in the entire nation to use such system. Some other additional facilities include a computer lab in the College of Business and simulation lab in the School of Nursing.

Crain reflected on the addition of new facilities. He looked back on the institution’s initiative to add other facilities like security surveillance cameras and lamp posts to make campus safer, in addition to major ones like the addition of buildings.

“They do provide an enhancement to student’s campus experiences,” said Crain. “Another reason it is important is from a student recruitment point of view. Students and their families, who are often very influential in the recruitment process, are very sensitive to campus environment and whether it’s clean, attractive and safe.”

Various concentration of studies have been added to meet the needs of the students. In the year 2012, the university started offering doctor of nursing practice degree and bachelor’s degree in information technology program has been offered since 2013.

Facilities like tutoring services and academic advising through the Center for Student Excellence were also added.

“Over the ten year period, we’ve added the Center for Student Excellence, which is the advising student-assistance center, and we’ve increased the number of other student support services,” shared Crain. “We’ve added number of academic advisors, and we are in the process of expanding our tutoring program.”