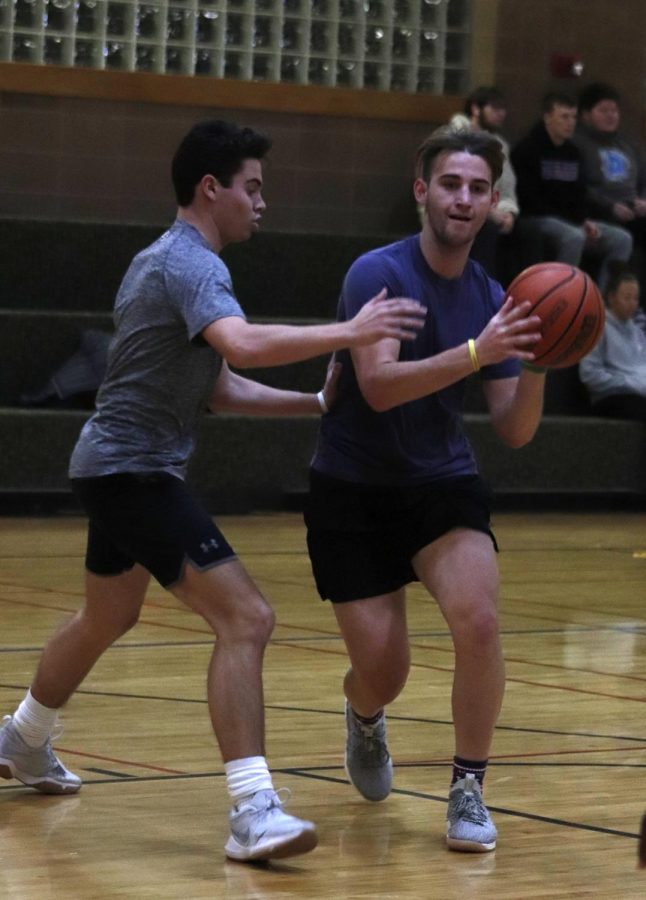 Students participate during the intramural basketball competition organized by the Pennington Student Activity Center during Spring 2019.

Each semester, students have the opportunity to compete against each other by playing intramural sports through the  Recreational Sports and Wellness program.

The university offers many ways for students to stay active and get involved on campus.

The university’s recreational sports program on campus hosts intramural sports so that students can create their own teams, or join one, and compete against each other in a safe and fun environment.

This fall, several intramural sports will be offered.

“For this semester we do have about 10 different intramural events,” said Jason Templet, coordinator of competitive sports. “Some sports that the REC offers are racquetball, flag football, volleyball, in-door soccer and much more.”

The Pennington Student Activity Center provides sports that are accommodating for anyone who would rather play in a less-intense environment.

“We also have smaller tournaments like ultimate frisbee, corn hole, basketball, trashketball and doubles tennis that many enjoy to participate in as well,” said Templet.

The Penington tries to include sports that are fun and light-hearted, including trashketball.

“Trashketball is where you start out by playing on the basketball courts with two volleyballs and trashcans,” said Templet. “The goal is to try to throw it in another team’s trash can. It’s actually really fun, especially if somebody isn’t that athletic but they still want to get involved.”

Students can easily sign up and get involved in these intramural sports.

“We use a website called IMLeagues.com, where students can sign up on there and those eligible could be any current student, faulty or staff member who wants to participate or create a team,” explained Templet.

For each intramural sport, the typical amount of people per team varies.

“For some of our bigger sports, like volleyball, they can join as a free agent or have a whole team put together,” shared Templet. “For football parties, it’s usually 7-on-7, volleyball is 6-on-6 and indoor soccer is 7-on-7.”

Students  can make suggestions as to which intramural sport they would like to see added. The addition for this year is ultimate frisbee.

“We are trying out ultimate frisbee this year for the first time,” said Templet. “I know I really loved it when I was in college, and I feel like a lot of students would enjoy it too.”

Intramurals are held in different places, depending on the number of players and equipment needed.

“Most of the intramurals are held in the REC center, which is nice because the weather isn’t much of a factor when it comes to tournaments,” explained Templet. “However, we do have events that require a field, so most of those tournaments are held in North Oak Park, here in Hammond.”

Each year there is also a favorite intramural sport that many look forward to.

“Our most popular intramural sport is definitely flag football,” said Templet. “We do have mainly a lot of Greeks, and just other students around campus, that really love to play in this sport particularly.”

Templet encouraged students to participate in the intramurals for this upcoming fall semester.

“Definitely come check out the intramural website, talk to us in the rec center, or attend any intramural event to see what it’s all about,” said Templet. “It’s really a great way to get involved on campus, and I would recommend the experience to anyone.”

The university rec center has all intramural sports times and locations posted on their page on the university website under the intramurals sports tab.