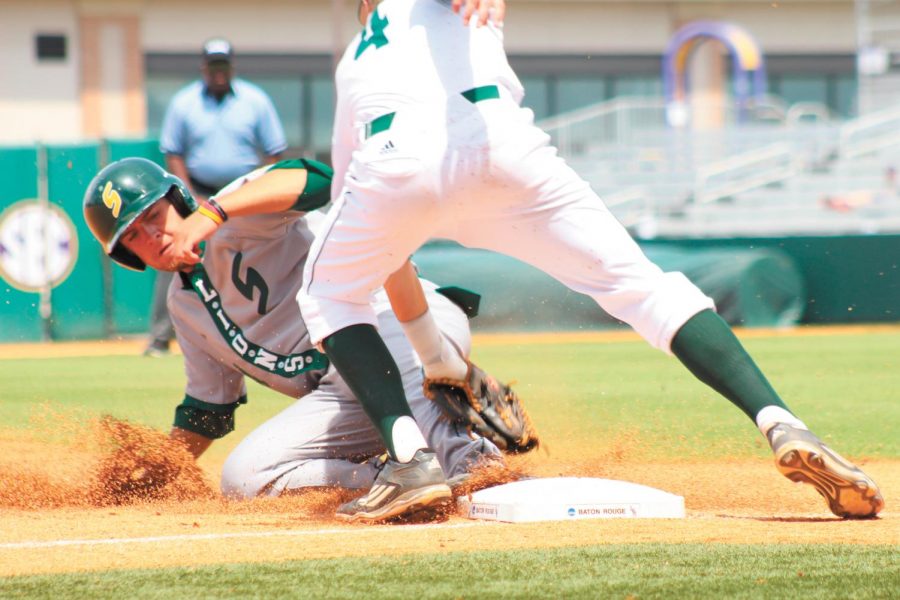 Drew Avans, a 2018 alumnus, slides into third base in the 2016 3-2 win in the Baton Rouge Regional Tournament. The Lions finished 2016 with a university record of 40 wins. Avans currently plays for the Tulsa Drillers, the Double-A affiliate for Los Angeles.

Drew Avans, a university alumnus, graduated in 2018 and was drafted by the Los Angeles Dodgers in the 33rd round of the 2018 Major League First-Year player draft.

“I used to wait for my dad at the front door when he got off work with my bat and a bucket of baseballs,” remembered Avans. “He taught me a lot, and he was always there when I needed him.”

Currently, Avans plays for the Tulsa Drillers, the Double-A affiliate for Los Angeles. He shared what he likes about playing in Tulsa.

“Tulsa is a great city with a great organization,” stated Avans. “They have many loyal fans in the city who always show up and get loud at home games. Their stadium is really nice in Tulsa also. It really worked out for me because I never really cared for big cities.”

Originally a native of Alabaster, Alabama, Avans shared how he learned the university existed and how he was found by Matt Riser, head coach of baseball.

“I did not even know Southeastern Louisiana existed until I was scouted by them,” stated Avans. “I was from Alabama and never heard of them, but once I realized who they were, I learned how successful a baseball program they had. It is fun to tell people where I am from. I was first scouted by SLU when I started playing tournaments in Mississippi. Coach Riser saw me play a couple of tournaments out there and showed immediate interest in me.”

Along with playing baseball, Avans played multiple sports growing up and in high school.

“I played some football and basketball when I was a kid,” explained Avans. “I tried playing at least one year of every sport when I was a kid. I tried out for my high school basketball team but never made it. Then my senior year, I thought I would run cross-country and compete with people who have been running for years but I was quickly proven wrong.”

“It was definitely my favorite four years of my life,” said Avans. “I loved college and got to earn a degree in finance. I really grew to love the town of Hammond. It is a very relaxed environment. My homerun against LSU at the Pat was my favorite memory while playing there. The game was sold out and had tons of fans out there showing love and support for the team. It was such a great feeling.”

After being drafted by the Los Angeles Dodgers, Avans described how it felt to get drafted by such a historic franchise.

“It was truly a dream come true,” explained Avans. “It is something you dream about when you’re a kid playing in the backyard and at the baseball field. I was so excited when I found out I was drafted by the Dodgers.”

The 2018 alumnus was a utility player while playing at the university, the Drillers look to do the same with him this upcoming season.

“This season they asked me to do a little bit more pitching,” commented Avans. “I need to be a bit more reliable with my pitches I think. But, it’s going to feel great to start pitching again. I throw a fastball, change up, curve ball and a slider.”

The offseason started for Avans in September. He shared what he plans to do with his time off.

“I can not wait to be at home and just relax with my fiance,” said Avans. “I am a huge Saints fan and plan to watch all their games from home.”