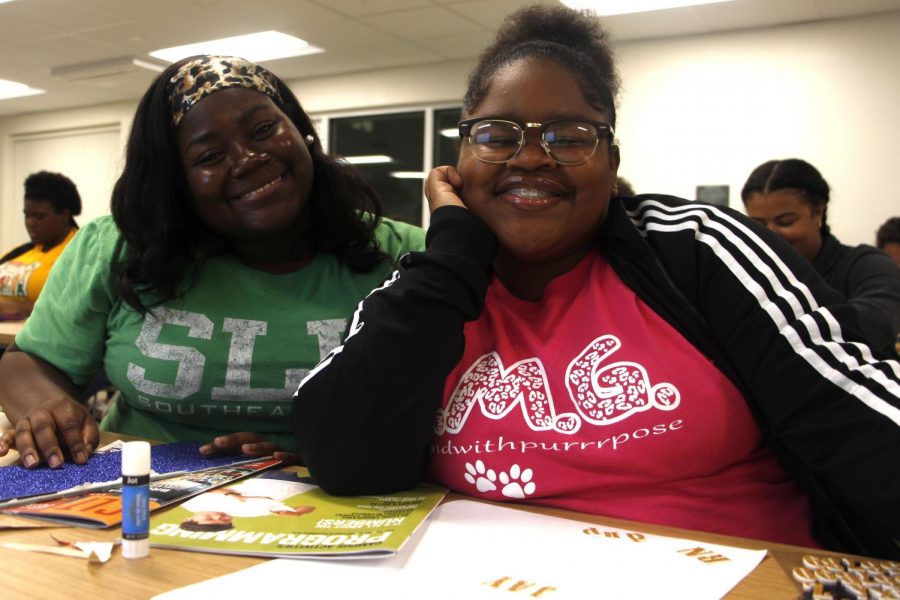 Deonna London and J'Asia Bovia, freshmen nursing majors, made their own vision boards at the Pre-Nursing Society's "Vision Board Party." The event was intended for anyone interested in nursing to meet others in the program and to motivate each other as they pursue the career path.

The Pre-Nursing Society held a “Vision Board Party” on October 15.

A vision board is typically a collage of quotes, photos and other items that an individual refers to for inspiration or motivation.

As part of the club’s purpose to help motivate students who are on the pre-nursing track, the event was meant to provide a space where club members and those looking to join the organization could interact and create something that would inspire them.

Jaydalyn Epps, a junior nursing major, founded the Pre-Nursing Society and serves as the president. The “Vision Board Party” was the club’s first official event outside of the club’s meetings.

Epps encouraged anyone who is associated with the nursing program to consider joining the club and attending the events.

“We encourage, even if you’re not a nursing major, if you’re interested in the field of nursing, if you know somebody who’s in nursing and you just want to understand what they’re going through, or you just want to be there just to get an idea, you’re welcome to come,” said Epps. “It’s not specifically for nursing.”

Asia Garner, a freshman nursing major, attended the event. She explained why she thinks it is important for students who want to pursue nursing to stay motivated.

“People always say it’s hard,” stated Garner. “You need motivation anyways to keep you going, especially when you’re down, like if you’ve got a bad grade on a test or something.”

J’Asia Bovia, a freshman nursing major, decided to become a member of the Pre-Nursing Society after attending. She described what part of the club she was looking forward to the most.

“I’m excited about learning more,” said Bovia. “Just learning more about what they do and getting more involved and networking, meeting other people and other nursing majors in the program.”

The Pre-Nursing Society meets on the first and last Tuesday of every month. For more information, follow them on Instagram at @pnsselu.