‘Full Court Fest’ allows fans to get to know their teams 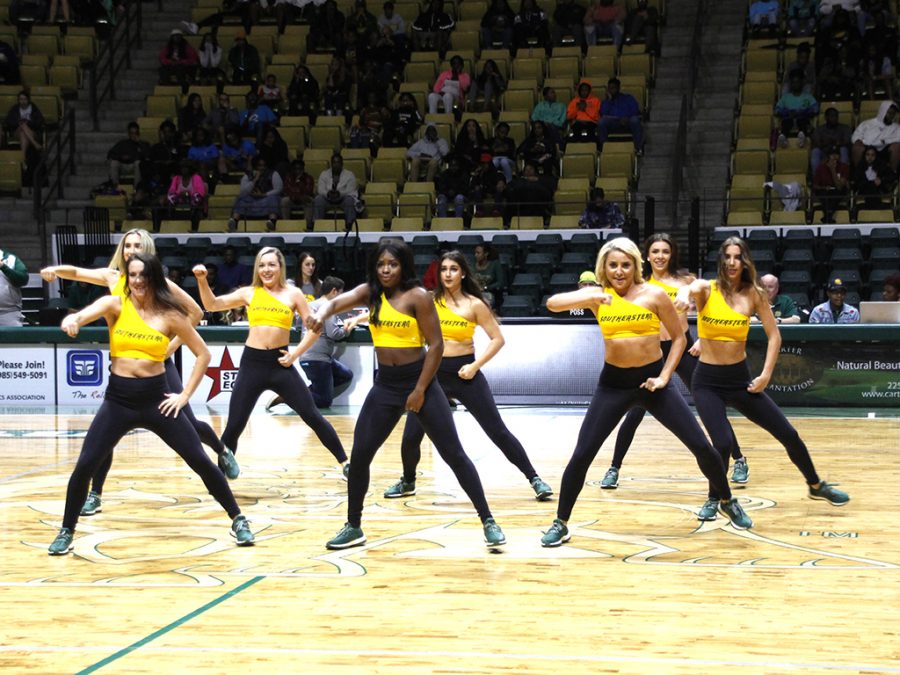 Cheerleaders perform a routine at the 10th annual "Full Court Fest." Admission to the event is free for all ,and the first 300 students to enter the University Center receive a free t-shirt. Olive Garden will be served while supplies last.

Before the women’s and men’s basketball seasons start, the university will host its 12th annual “Full Court Fest” on Wednesday.

The purpose of the event is to let Lions fans get to know both teams.

Lindsey Owens, assistant athletic director of marketing and student promotions, explained how much planning and setting up goes into “Full Court Fest.”

“It generally takes 2-3 months to plan and coordinate ‘Full Court Fest,’” commented Owens. “On the day of the event, it takes about an hour to set-up.”

With the general focus around promoting and marketing both basketball teams, Owens shared what free giveaways the athletic marketing team will be offering.

“The first 300 students will receive an exclusive 2019-2020 basketball long-sleeve tee,” said Owens. “Other than that, Olive Garden sponsors the event. So, there will be Olive Garden to eat ‘while supplies last’ and a lot of cool prizes like gift cards, Southeastern swag, money. This year, we’re giving out Pelicans tickets and having a progression shot for a chance to win free Olive Garden for a year.”

Along with getting to know both teams, Owens explained why she thinks students should attend “Full Court Fest.”

“I think it’s important for students to be there and be involved,” stated Owens. “Students should download the Lions Gameday Experience app to check-in for bonus points. They could be picked for some of the contests just by checking-in. We’re also doing a contest where a student will get the chance to do a shoot-out with Dean Gabe Willis. You can check out his Twitter account for the information to participate.”

David Kiefer, head coach of men’s basketball, shared why he thinks the freshmen basketball players will be the most excited for the event.

“The freshmen are going to go all out and have the most fun probably,” said Kiefer. “You can expect them to be the most excited because they have never seen anything like this ever before. I feel they’re going to be amazed by the crowd.”

The first-year head coach shared what he hopes to show Lions fans at “Full-Court Fest.”

“We want to give the fans a chance to see all the new faces and see our new coaching staff,” shared Kiefer. “There has been a lot of continuity over the past few seasons and now we have a lot of turnover, and we want fans to see that. We want the fans to come in and see how athletic our kids are. They’re going to see the players in a different light instead of a serious tone.”

The men’s basketball team will open their 2019-2020 season on the road against Tulane University on Nov. 6, and the women will start their season on Nov. 4 at home against Southern University at New Orleans.