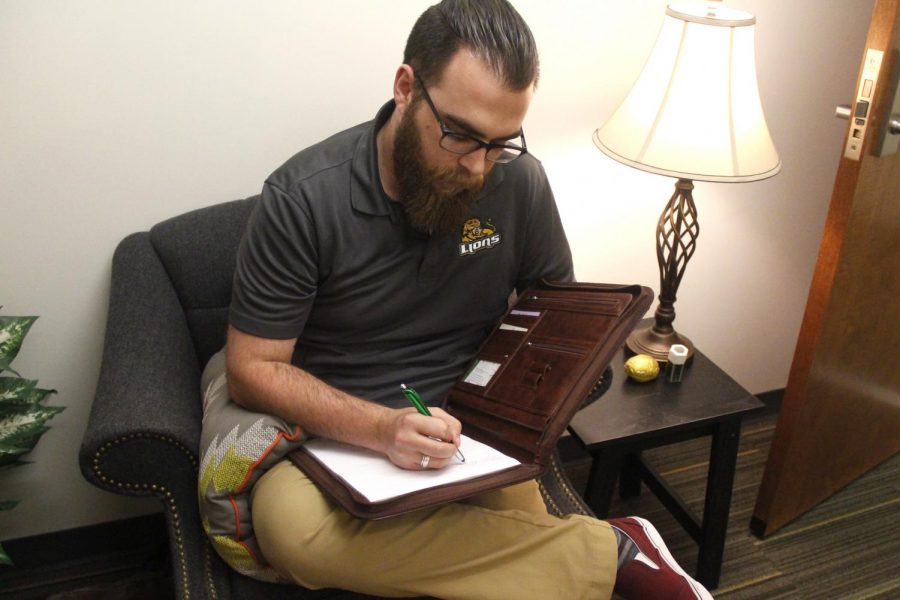 Wes Erington, a mental health counselor at the University Counseling Center. Support groups facilities are provided by the UCC for students to get help. Overcoming Anxiety is a support group that meets Wednesdays from 3:30 - 5 p.m. in the Studnet Union Annex room 2205.

The University Counseling Center is offering a means to help students who become overwhelmed.

The UCC started the semester with the introduction of support groups. One program is the Overcoming Anxiety Support Group for students who have overwhelming thoughts during their time in college.

Wes Errington, a mental health counselor at the UCC, explained the details of the group.

“It serves as a meeting place for students to come and discuss ongoing issues with anxiety,” explained Errington. “We differentiate a support group from a counseling group in that a support group is mainly for the students come and have that social support amongst themselves whereas a counselor, or me in that case, is to help facilitate discussion, help facilitate a better understanding of anxiety and, at times, provide different types of coping methods, exploring various forms of coping methods, various forms of how anxiety is managed, but the overall goal for the support group is for people to come together who are suffering.”

Errington explained that the counseling center came up with the idea of the support group during summer.

“The anxiety group was something I really wanted to start up,” stated Errington. “I had experience working with groups in my internship and trying to start one is very very difficult, but I felt as though an anxiety group was something that could be really universal, that all students could sort of get behind and want to explore. So, it started from a group – from a meeting and something I pitched and something I have been really trying to enforce this past semester.”

Out of many elements that the group uses, Errington explained one method that he uses to help participants.

“One thing I definitely work on a lot is something called ‘reframing self-defeating thoughts,’” explained Errington. “It’s something I try and incorporate a lot with my own clients, and it’s something I try to reinforce with every group that I have because at times we don’t have the same attendance.”

Errington explained what the six self-defeating theories are.

“Right of the top is black-or-white thinking: Everything is all good or all bad,” shared Errington. “Number two would be helplessness, which is ‘I don’t see how much power I have in this situation. I don’t feel like I have enough impact on the situation.’ Number three would be hopelessness: thoughts of a bleak future, ‘things are never going to get better.’ Thoughts of worthlessness would be number four: ‘low worth, low view of self.’ Number five would be catastrophizing. The last one that I would put would be negative forecasting ‘everything is acting badly so I am going to act as if it is going to be badly.’”

For Errington, this group is beneficial to anxiety-afflicted students, considering the amount of clients with anxiety he talks to.

“You could range from people coming in with depression, they’re coming in with low self-worth or coming in regards to trauma,” commented Errington. “Trauma is a big one, post-traumatic stress disorder, that’s enough stress right there.”

Errington described how one can tell if someone is going through anxiety.

“You know, someone is going through a crisis, and they don’t necessarily feel like they’re feeling really anxious right now,” said Errington. “They would probably identify it as the situation is really overwhelming, they’re feeling overwhelmingly sad. People with depression also have that double-edged sword of anxiety as well.”

Since the start of the meetings in September, Errington has received positive feedback for attendees in how the meetings have helped.

“We have really small attendance,” stated Errington. “I have had people approach me when we’re doing public functions like running a table, trying to share some information with the UCC.”

Errington shared that he wants the meetings to grow in numbers but shared why the group sees such small numbers.

“I want it to succeed, but the thing is we are running an anxiety group, and for people wanting to come in for anxiety, it’s not easy for them to show up,” commented Errington. “So, you know, as long as people continue to show up, whatever the attendance rate, I feel like at least one person can get something out of it.”