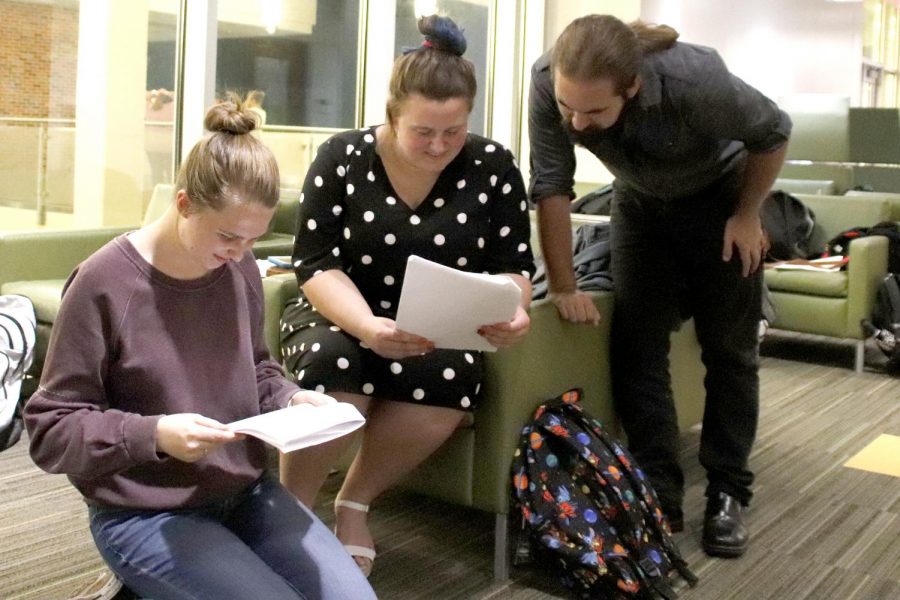 Kat Schepker, Shelby Grantham and Hayden Kimball review lines before a rehearsal. Many actors and actresses suggest practicing lines as a group to catch individual mistakes.

Some students find it difficult to get in front of their classmates and present material, but the Communication 210 and 211 courses are required general education courses for almost all university students.

Alpha Psi Omega is a theatre honor society created to acknowledge those with accomplishments in theatre. A large part of an actor’s work consists of public speaking.

“It helps to run lines with people, whether that be people in a show or just friends,” said Meng. “Oftentimes, you think you have them and then you get onstage and you don’t have them so just being able to get a friend to read them with you and go through them and correct you if you have anything wrong.”

Many of the members of APO echoed the same sentiment: reading over lines with a friend can help you memorize them.

Students sometimes struggle to share the things that they have worked hard on with their peers. For a beginning actor or actress, there can be a lot of anxiety.

“I think a lot of people don’t like to open themselves up to people and that’s a lot of the problem,” said Meng. “It’s hard to be vulnerable in a world like today, so it’s hard to open yourself up to people much less a large group of people.”

A common problem for performers of any kind is line memorization. If a performer or speaker doesn’t have their lines committed to memory in a confident manner, it can affect the entire tone and flow of their delivery. Alden Mason, a sophomore communications major, is in his second year of APO.

“One trick that I did in a past play here called ‘She Danced With A Red Fish,’”shared Mason. “Just write the first word of your lines and the person before you’s lines before that so you aren’t technically looking at the script and looking word for word your lines. But you have the beginning of the words and that really helps. It’s a very fast way to learn lines.”

“With monologues, it’s better to learn it in little chunks, because if you learn a whole passage and you miss a line, you’re stuck,” shared Perrin. “With little chunks you just move on to the next little chunk.”

Stage fright can be common among actors, especially those who have not had as much experience with performing for an audience.

“I can guarantee you every actor has stage fright still, at least the nerves are still there,” said Mason. “You don’t want to mess up.”

“The theatre department at Southeastern isn’t crazy big like some schools, so it’s a lot of the same faces and you get to know a lot of people really really well,” stated Meng. “The community grows as you grow and at the same time you get more comfortable being onstage. It’s like being in a speech class and getting more comfortable as you get to know the community, you just get better at dealing with the nerves.”

Taking the time to get to know your peers in whatever class you need to speak publicly in will certainly pay off in the end. It just helps you to feel less anxious and to know your audience and tailor your delivery to their preferences.

“You can do a lot of deep breathing techniques,” suggested Meng. “At the end of the day, I always find a bond with my cast and rally together as a force and think about that rather than the fact that I’m about to be on  a stage in front of hundreds of people.”