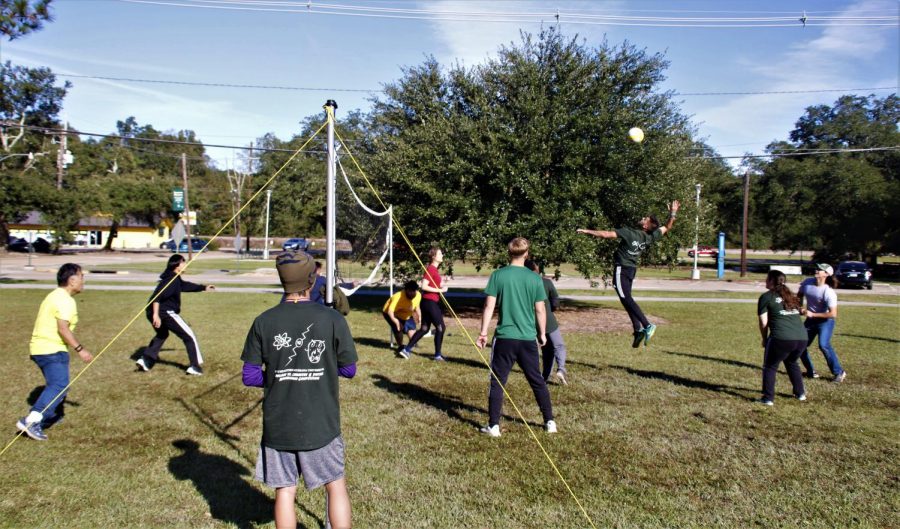 The biology team won both volleyball games, giving them the lead to win the competition.

Three organizations competed in a variety of competitions including a quiz-bowl, soccer game, potato sack race, a volleyball game and tug-of-war games.

On Nov. 1, the Biology Undergraduate Society, American Chemical Society, and Society of Physics Students hosted the “Biology vs. Chemistry/Physics Competition.” The games used to be an annual event for the departments 20 years ago, but they had since stopped.

Pedro Antenucci, the president of the university chapter of the American Chemical Society, explained the decision to bring back the competitions.

“I was talking to Dr. Pendarvis, and I was taking his biology special topics in spring of 2018,” said Antenucci. “And then, I brought up the idea of having a STEM competition, and he actually brought up about 20 years ago, the biology department and the chemistry and physics department did a friendly competition just like this one. We got inspired by it, and we tried to pick it up with the chemistry club, physics club and biology club.”

The event had originally been planned for Homecoming Week, but after heavy rains, it had to be postponed. Antenucci shared the setbacks the event faced after being held off and how they overcame them.

“Our attendance decreased and some professors had some conferences today but overall attitude toward the event was great,” explained Antenucci. “We had tons of people come equally from biology and physics. People bought shirts, which helped us fund this event. This event couldn’t have been done without the help from the students, faculty, and pretty much everybody. The credit might be given to the leaders of all the organizations, but overall everybody who’s part of the biology, chemistry, and physics departments were able to make this event a success.”

The main goal of the event was to get scientists from different backgrounds to socialize and talk and get to know each other outside of the classroom.

Conor McGibboney, a physics major and officer for the Society of Physics Students, enjoyed seeing scientists from many disciplines hanging out.

“The best research that’s going to happen isn’t going to be just from one discipline, it’s going to be from collaborations,” explained McGibboney. “People here are talking and meeting who would otherwise not meet, so that’s what I get excited about.”

Tyler Tran, treasurer of the Biology Undergraduate Society, summarized why he found the event to be fun.

“We’re just out here having fun, a little friendly competition to see which science is the best,” said Tran.

The College of Science and Technology will host “The Science of Star Wars” presented by Dr. Rhett Allain, associate professor of physics, on Nov. 13, at 6 p.m. in Pursley Hall.