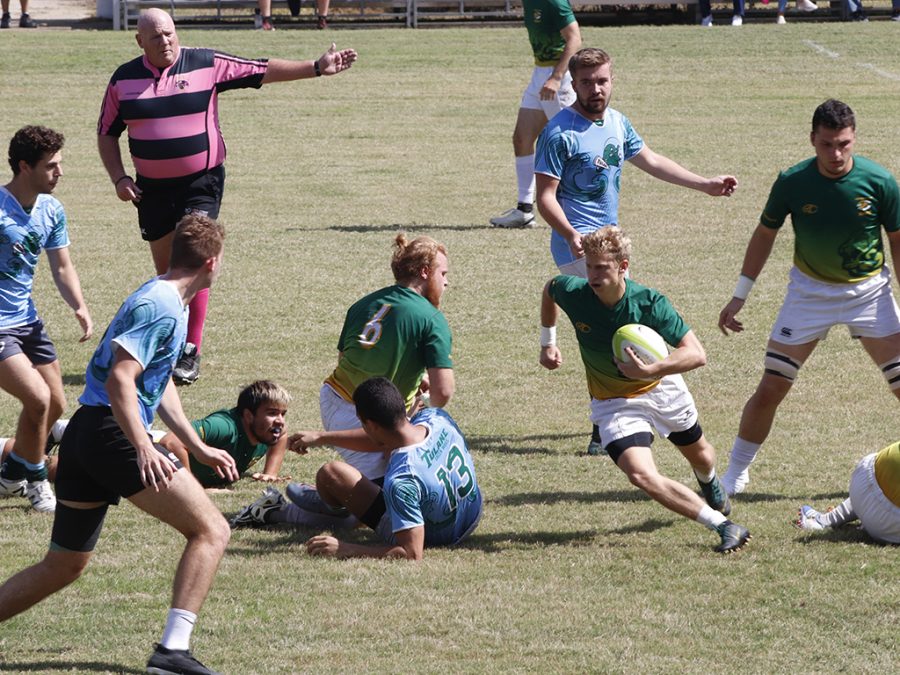 After being chartered in 2018, the university rugby team will look to secure their first-ever championship.

Currently, the university sits at an undefeated record of 5-0 and is ranked 40th in the Division II Goff Rugby Report Rankings.

Donald Hart, head coach of rugby, is happy to have hard working players.

Hewson Knight, a kinesiology major and inside center, shared that the team has been practicing for months now.

“We started practicing early August,” said Knight. “Our first two matches were non-conference games, therefore, were essentially scrimmages. We were able to learn from them and grow.”

Knight shared how the team’s success has been a team effort this season.

“It’s hard to skip over anyone on our roster for recognition because our success has been such a team effort,” commented Knight. “What stands out to me has been the effective and necessary leadership from experienced players such as Cole Stevens, Nick Montreuil and Jack Tucker. Players who have taken huge strides from being good rugby players to being absolutely dominant on the pitch such as Allen Pennington, Mikey Trappen and Bryce Bourne. Players new to the sport who are helping us win and possess scary potential such as Micheal Kennedy, Kass DeLaune and Sami Madonna.”

Unlike some rugby teams, the Lions do not change their game plan according to their opponent.

“We dictate the way the game is played,” commented Knight. “We plan to use our kicking game effectively while running and attacking organized offense. Defensively, we spread as a team to cover the whole field and blitz at the offense. We hit players until they don’t want to run at us anymore. While ensuring effective and sure tackling, we are able to force turnovers as well as wait for the offense to make a mistake.”

Cole Stevens, a chemistry major and an eight-man, explained who taught him the sport of rugby.

“This is only my third season playing rugby,” shared Stevens. “There wasn’t one person I can contribute with teaching me.  It came from watching the game and actual in-game experience.  I became interested in rugby just because I wanted to try it.  I was at LA Tech when I got an email saying, ‘Come out and practice,’ so I went for it.  I’ve loved the sport ever since.  The competitive nature and the friends and the brotherhood that was formed are what I love most about rugby.”

Just like Stevens, Knight learned the game of rugby at a different college in Louisiana.

“My dad played throughout college and while in the military,” commented Knight. “It always sounded like a lot of fun. So while at LSU, I sought out involvement in the team. The older guys there were welcoming and helpful, as the rugby community often is. They introduced me to the game and invested in my improvements and success. A lot of those guys now play professionally for NOLA Gold Rugby.”

Stevens expressed how it felt to make it to the championship game in the team’s second season of existence.

“It feels amazing, we have put in a lot of work to make it this far,” explained Stevens.

The Lions will look to capture their first-ever championship on Nov. 16 in Memphis, Tennessee against the University of Memphis.