Lions knock off Rams to earn a second victory 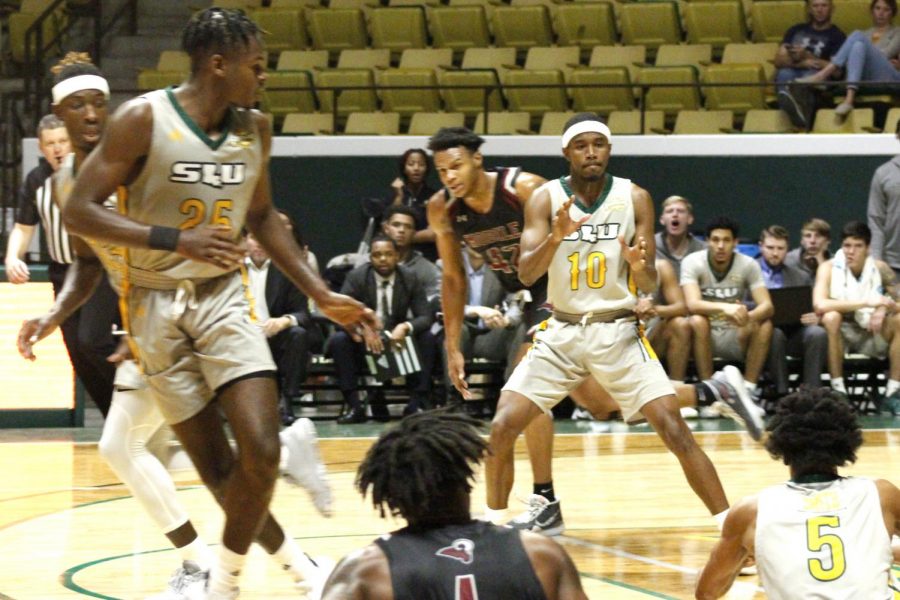 Senior guard Von Julien gets ready to catch a pass from freshman guard Byron Smith. With the 65-58 victory the Lions improved to 2-2 on the regular season. Southeastern's next game will be on the road against the University of Tulsa on Nov. 20.

The men’s basketball team took a win on Nov. 17, defeating the University of Mobile Rams 65-58.

The team made 23 of 63 field goal attempts, had 18 defensive rebounds and 17 total steals.

David Kiefer, head coach, was impressed with the underclassmen who played heavy minutes off the bench.

“I’d say some of our young freshmen,” explained Kiefer. “Some of those who have never played heavy minutes tonight. They played a little bit more than usual and they stepped up and made some huge plays for us.”

“Ty’s activity, he always plays so hard,” explained Kiefer. “Our style of play suits him perfectly and his effort, his activity and his disruptiveness once again showed tonight.”

Brewer felt the team fell short of expectations despite winning against Rams.

“Honestly, as a whole, I don’t feel that we played as best as we could,” explained Brewer. “We had a lot of slippage and that hurt us going forward, but I got a lot of faith in my team. You know, they play hard, and I felt like everybody tried their best, but it was a lot of little things that added up to be big, but we got a break.”

Kiefer stated why fouls are an area the team needs to focus on in order to get better defensively.

“We tell the team every day ‘Great defensive teams don’t foul,’” stated Kiefer. “And, we have to continue to move our feet and not foul. We had a lot of avoidable fouls.”

With the university hitting the road to face the University of Tulsa, Brewer looks forward to playing the Golden Hurricanes.

With the victory, the Lions improve to 2-2 on the season with a three-game road trip starting Nov. 20.