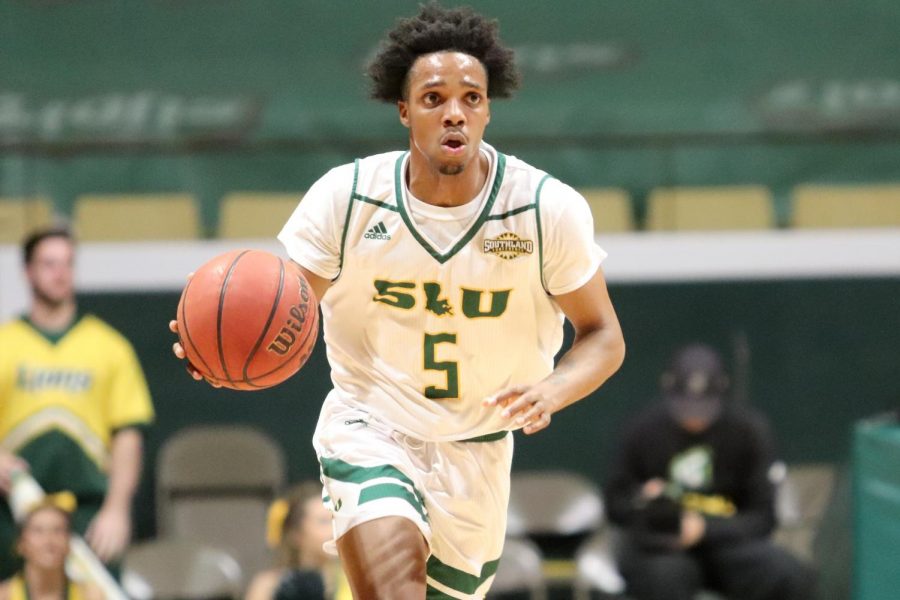 Freshman guard Byron Smith brings the ball down court during their game against Grambling State University. Smith finished the game with four points, one steal and two rebounds. With Friday’s 79-74 win, the Lions sit at a 3-6 record.

The Lions are currently sitting at a 3-6 record after defeating Southern University at New Orleans on Dec. 6.

Lions prepare for a three-game road trip that will span across three states. The team will start their road trip with the Dec. 18 Southland Conference match-up at Lamar, then will travel to Jackson, Miss. on Dec. 21 to face University of Mississippi and will conclude their trip on Dec. 29. against Oklahoma State University.

First year head coach David Kiefer described some distractions that may present itself in a road trip.

Kiefer discussed how these three away games will be different than past road trips.

“We have one conference game mixed in with two out of conference opponents,” commented Kiefer. “Obviously, all three games are really important, but the most important is the game in Beaumont against Lamar.”

With the Lions traveling to Stillwater, Okla. to take on Oklahoma State University, Kiefer explained what he is looking forward to in the game against the Cowboys.

“It’s going to be a challenge facing a team that has the potential to make the NCAA tournament,” shared Kiefer. “Having the chance to coach against a friend in Mike Boynton at Oklahoma State is going to be a surreal moment. At the same time, we cannot get caught up and forget what’s our task at hand, and we have to go out there and compete.”

Senior guard Von Julien discussed what his favorite part about road trips are.

Julien explained some challenges that he anticipates while playing three straight away games.

“I would think trying to get better each game,” said Julien. “Sometimes, fatigue can get the best of us. So, we need to do a good job in staying fresh and not getting tired too early.”

Prior to his playing days at Southeastern, Julien played his freshman season at Tulane University. The guard described how his time as a Green Wave prepared him for long road trips.

“I don’t get fascinated by the big lights anymore,” said Julien. “I just try to focus at the task at hand and do my job and perform to my best ability. The younger guys might get caught up and distracted by it but I don’t and I try to play the best that I can.”

The Lions will return home Jan. 2 to take on Stephen F. Austin University in their first conference game at home for the 2019-2020 season.