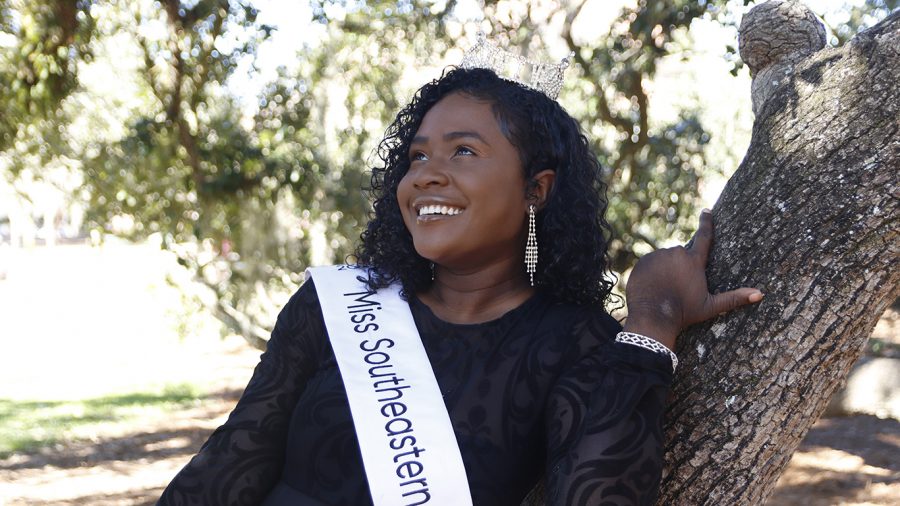 “That’s what I want to continue to do throughout my reign this school year—show myself, present, be of any help or service I can be to the community.” - Janine Hatcher, Miss Southeastern 2020

Originally from the city of Plainfield, New Jersey, Hatcher grew up as the second oldest of five siblings. Her parents moved to Chesapeake, Virginia when she was around 9 years old. She spent fourth grade through some of her undergraduate studies in Chesapeake until her parents moved to Louisiana.

Growing up in a Christian household with her parents and siblings, Hatcher shared that some of the most important parts of herself derive from family.

“I think my family as a whole, the values, the morals, the principles that were instilled in us as a child—I think those are things that shaped me,” explained Hatcher. “My family is huge on family and quality time. We have a big family—there’s seven of us. Even my extended family is huge. My siblings are my best friends. We’re really, really close. So, I think those qualities helped shape me as an individual—things that I want seriously in my future, have a family, do the same things my parents did, establishing my career and establishing myself and continuing to work towards the goals that I have for myself as an individual.”

Hatcher played the cello for the talent portion of the pageant, but she explained that the violin is actually her primary instrument.

She has been playing the violin since the sixth grade and shared how it has impacted her.

“It’s something I try to keep up with every now and then,” shared Hatcher. “Unfortunately, I don’t have the leisure to play like I would love to, but that is definitely something that also has shaped me. It just taught me so much discipline and persistence and initiative. So, that’s definitely something that has molded me as a person. I don’t think I would be the same person if I didn’t pick up that violin years and years ago.”

Hatcher is a senior business administration major at the university. She mentioned that the university has an MBA program, which is something she knew she wanted to pursue after graduating.

Hatcher shared how she has always known that she wanted to go into business.

“I just feel like people should have a greater understanding of financial literacy, and that’s something I wanted for myself, which is why I was always interested in it,” elaborated Hatcher.

She was excited when Janine signed up and believed that she would do well in the pageant.

“Janine is intelligent, talented and a fresh voice that will represent our university with pride throughout her year of service,” shared McDougal. “She is a fabulous pick for Miss Southeastern, and I am so proud of her accomplishments so far.”

“Everybody I’ve met, regardless of people’s different paths they’ve taken to get here, everybody respects each other’s journeys and encourages one another in their endeavors that they’re here for,” said Hatcher. “So, I think that’s probably been the biggest thing that I will take on and I will cherish here at the university.”

Being an out-of-state transfer, Hatcher explained that in terms of campus involvement, she was initially hesitant.

However, she found an organization with a cause that she believes in called Sons of Promise and Daughters of Destiny.

Hatcher described goals that she wants to accomplish during her time as Miss SLU, directed toward her platform—Respect Individual Potential.

“I know I want to have small fundraising events throughout the year, but I want to make sure there are two specifically designated for my platform to bring awareness to that,” explained Hatcher. “Those funds that are raised at those events will be specifically given to the organizations that I would like to give it to. Also, I would like to meet with the mayor or some kind of city official so we can talk about what we can do to help support their endeavors in boosting our education programs.”

Although it is just the beginning of her reign, Hatcher touched on who she wants to be remembered as.

“I want to be remembered as myself—Janine,” stated Hatcher. “I think people think that when you compete in pageants, it’s like they’re looking for a specific person, or you have to try to be somebody else, but really I was literally just myself. I showcased myself, and that’s what I want to continue to do throughout my reign this school year—show myself, present, be of any help or service I can be to the community. I want to be remembered as a servant leader. I’ve always been that. That’s something I’ve always done throughout organizations in high school and even in my previous institutions that I went to. I’ve always been that kind of voice to the community.”