Lions drop second game in a row to McNeese 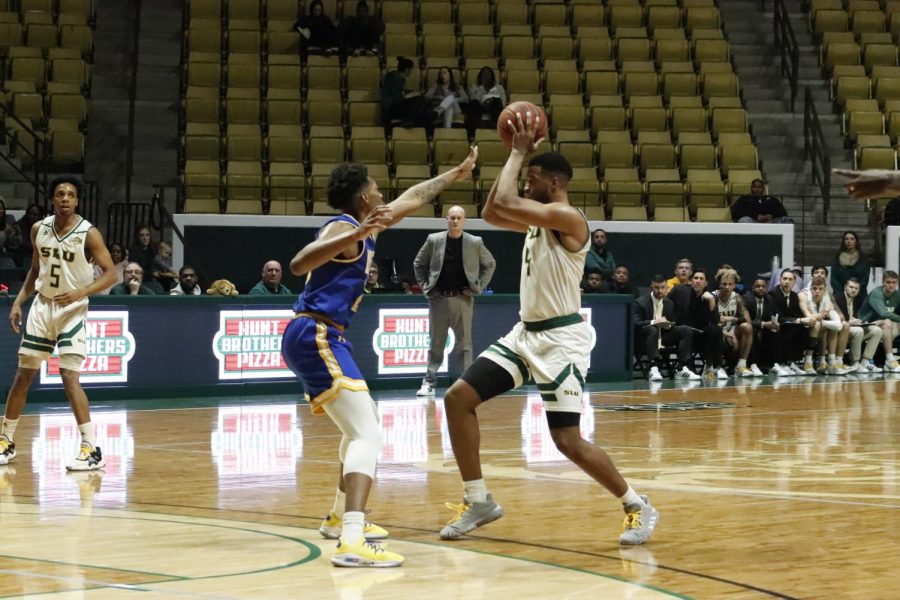 Junior forward Maxwell Starwood prepares to make a pass during the men's basketball game on Jan. 22. Starwood scored a career-high 17 points, earning the most points for the Lions during the game.

The men’s basketball team fell to the McNeese State University Cowboys of 77-61 on Wednesday, Jan. 22 at the University Center.

After the loss Lions, head coach David Kiefer explained how he was proud of the way the team fought through the game despite being short-handed.

“Obviously we didn’t play a good game tonight,” said Kiefer. “We were short-handed, but I think our guys battled the entire 40 minutes. We had only eight players tonight. We had a guy foul out in only nine minutes, so we really played the game with only seven guys. They competed and tried the entire game, and I was proud of that.”

Keifer explained how the team will recover from the night’s loss.

“We didn’t do much of anything well tonight when we play like that,” expressed Kiefer. “We just have to keep getting better at what we do. We gotta make sure we’re rebounding, we’re defending every play, we’re communicating. We gotta get back healthy. Most importantly, we got three guys out with an injury right now—one starter and two other guys that play heavy minutes. Gotta get our team back healthy, and that’s key.”

Junior forward Maxwell Starwood scored a career-high 17 points, simultaneously earning the most points for the team during Wednesday’s loss. Starwood played 28 minutes and finished the game with six steals and five rebounds.

Starwood described how his teammates helped him to be the best player he could be during the game.

“My teammates actually were looking for me, and they were finding me,” explained Starwood. “It was a good team game. We were passing the ball, swinging it. It was going around good in the first half. They found me, and they pass great. My teammates are the reason why my success is the way it is.”

Kiefer reiterated how the team will prepare for future games, beginning with Saturday’s game against Northwestern State University.

“Same thing we do every day,” explained Kiefer. “We game plan a little bit for our opponent, but at the same time, we do what we do. We try to get better at our offense and what we’re trying to do defensively. Northwestern State’s been similar every year that we’ve played them. It’s a rivalry game, and they’ve always played well, so we’ve gotta make sure we bring our best effort and move on from this one and bust our butts.”

The Lions are scheduled to take on the Northwestern State University Demons on Saturday, Jan. 25 at 3:30 p.m. in Natchitoches.