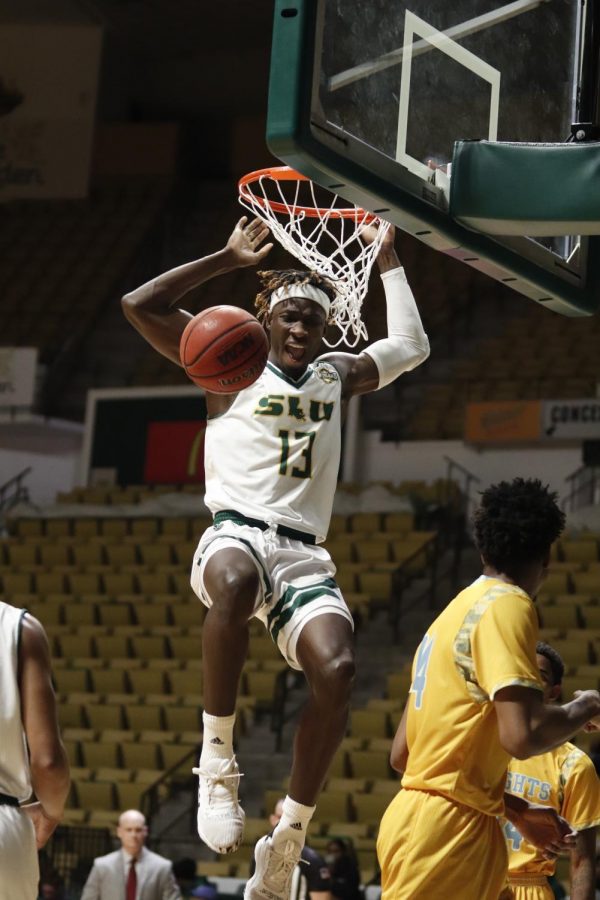 Junior forward Pape Diop, native of Ziguinchor, Senegal, dunks the ball in the 79-74 victory over Southern University at New Orleans

As the 2019 fall semester came to an end, university basketball players prepared to practice, travel and compete throughout the winter break.

With several practices and games scheduled, the men’s and women’s basketball teams shared their thoughts and struggles of playing throughout winter break.

Morgan Carrier, a junior guard and forward for the university women’s basketball team, expressed that playing the sport is worth having a busy schedule.

“It’s fun being around the team,” shared Carrier. “It’s always a good experience playing the game that I love. It’s just hard not being able to go home and spend as much time with my family as I would being a regular student, but it’s all worth it.”

Carrier shared what she hopes to accomplish during the current and upcoming seasons.

“At the end of the day, I know we’re playing for a higher goal to win a championship,” said Carrier. “I just want to stay as consistent as I can and be a leader in any way I can be for the team, and to win two rings, to finish my last two years out with a ring.”

Celica Sterling, senior guard, mentioned what she looked forward to and described what kept her motivated throughout winter break.

“Pretty much just playing,” said Sterling. “That’s what I look forward to, being able to play another game. Some days it’s hard, but then I have to look at it like this is basically what I’m getting paid to do. They’re paying for my schooling, so I have to be here ready every day and ready to go because this is what I want to do. So, I have to do it.”

The men’s basketball team was also able to devote more time towards basketball throughout the winter break, as they had time away from classes.

“I honestly kind of find it easier because I don’t have many other students around me,” commented Brewer. “It actually gives me time to work on things that I need to work on. I’m spending time on things that I love. I feel like I become a better person, a better player and a better teammate.”

“I actually like it because we get to really focus on basketball,” shared Julien. “That’s the thing we love and not have to really worry about waking up for class. We can just get in the gym whenever we want.”

For many of the players, spending more time together during the break allowed them to bond. Brewer shared how winter break has helped the teammates get closer.

“We’re honestly the only family we have here over this break and the coaching staff as well,” shared Brewer. “So, that’s really going to make us get closer.”

Julien explained how sharing a love for basketball with his teammates has brought them together.

“My teammates coming every day and just having that bond with them,” explained Julien. “Just having guys that give it all and leave everything on the court, and I would say we have that factor of just loving basketball that brings us together.”

As a senior, Julien mentioned what he hopes to accomplish by the end of his final season.

“We would love to get conference championship and be able to make it to the NCAA tournament,” said Julien.