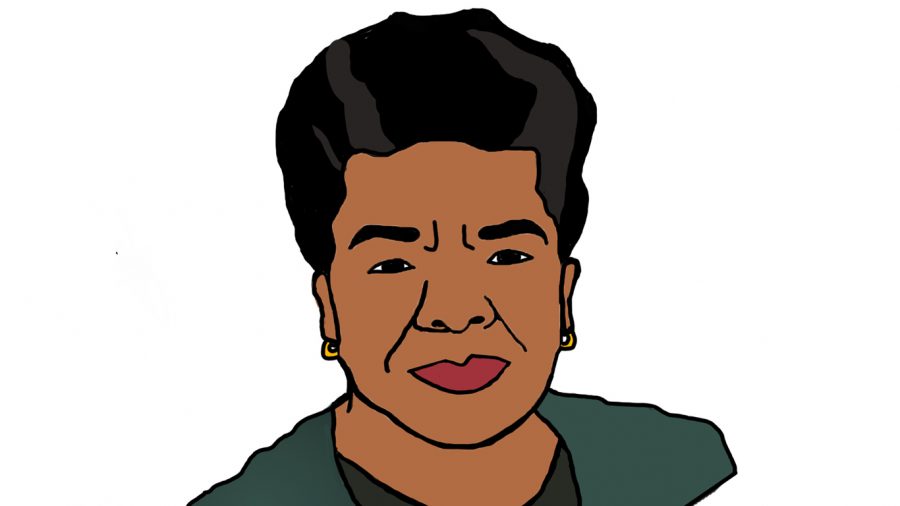 In honor of Black History Month, a nation-wide celebration that spans the month of February, The Lion’s Roar will feature a series of articles written by our staff that reflect on the accomplishments of three individuals who have greatly impacted African-American history.

After facing prejudice, discrimination and hate, Maya Angelou earned multiple awards, became an activist for the Civil Rights Movement and became a powerful symbol of hope.

Angelou was born in St. Louis, Mo. in 1928 and raised in Stamps, Ark. after her parents’ divorce. Growing up as a black female in the Jim Crow era, Angelou experienced racism directly.

At eight years old, she was also raped by her mother’s boyfriend. He was killed by Angelou’s uncles after they became aware of the crime.

The situation caused Angelou to enter a period of mutism, in which she chose to remain silent for five years out of fear that her voice would kill people. However, Angelou emerged from the period with a love for singing, performing and writing.

Angelou accomplished many things. She became an avid activist and joined the Harlem Writers Guild. She organized Cabaret for Freedom, a fundraising revue for the Southern Christian Leadership Conference and joined Martin Luther King Jr. and Malcolm X in organizing protests.

The multi-talented figure became an actress, poet and author. Her works, which addressed racism and other challenges, gained national attention. Angelou even presented one of her poems, “On the Pulse of Morning,” at Bill Clinton’s inauguration.

Angelou earned the title of first African American to have her screenplay produced. She wrote more than 50 poems and published 36 books centered on racism, the most famous being one of her seven memoirs: “I Know Why the Caged Bird Sings.” Angelou received the Presidential Medal of Freedom from Barack Obama for her collection of poems and won three Grammys, among many other awards.

To me, Angelou’s legacy represents the unbreakable power of the human spirit.

It is inspiring to see how Angelou, a black female growing up in a post-civil-rights-era, adapted to and overcame countless obstacles when the world was against her.

We may not realize it, but we all have done what she has, at least to an extent.

Think of a time you were torn to shreds because of something you couldn’t change, no matter how much you wished you could. Remember that time you took a shot at something you believed was right for you, only to figure out that it was never yours in the first place? What about when you lost your beloved family member to cancer, or your best friend in another way? Remember the times that you felt life was against you, and you didn’t know why.

Maya Angelou grew up in a brutal, unkind world. She was raped. She was harassed. She lived in fear every day, so much that she stopped talking for five years.

But she didn’t let it stop her.

She turned those experiences into books, poems and art to give people hope. She fought to become the voice of millions who for hundreds of years didn’t have one. She turned the cards life dealt her into a winning hand and showed every one of us that we can do it, too.

If that’s not inspiring, I don’t know what is.