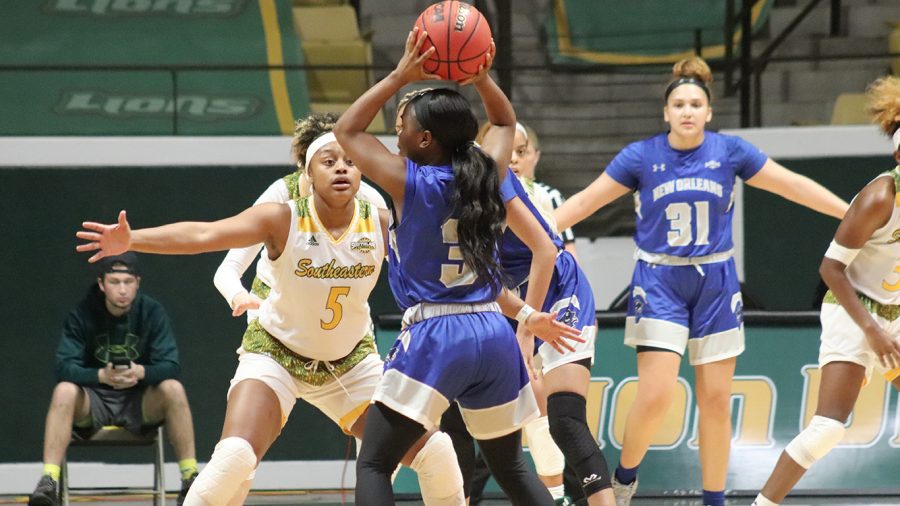 Competing first at 1 p.m. were the Lady Lions, who extended their streak to four wins after defeating the Privateers 73-54, the longest Lady Lions win streak since the 2008-2009 season.

“Anytime you can beat a rival that’s school is 45 minutes away that feels really good,” shared Guzzardo.

At the end of the third quarter, the Privateers came within three points of the lead.

“I told them to stop giving up the easy offensive rebounds and start boxing out,” said Guzzardo. “We stopped the easy plays and started to get really aggressive in the fourth quarter.”

The third-year head coach explained how the team’s energy has been during the four game win streak.

“We have a high energy right now and everyone is feeding off of each other,” stated Guzzardo. “Our shots are falling, and, everyone is passing the ball really well. It’s exciting to play like this, and I can’t wait to see where we go with this hot streak.”

The university men’s basketball team competed against UNO at 4 p.m. With a score of 73-84, the Privateers ultimately pulled away from the Lions.

Up next, the university men’s basketball will be playing against Houston Baptist University on Feb. 5 at 7 p.m. in the University Center.

The women’s team will play against University of the Incarnate Word on Feb. 8 at 1 p.m. in the University Center