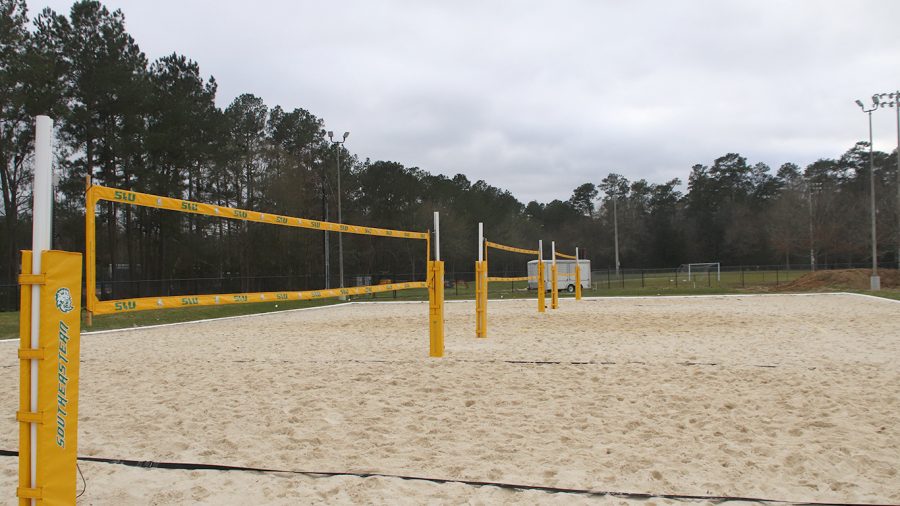 The new beach volleyball complex features three courts, along with a berm for spectators to watch from. The complex will also host the Lion Up Beach Bash on March 20.

The first home game at the recently constructed court isn’t until March 20 for the Lion Up Beach Bash, but the season will start much earlier for a season opener in Covington against Texas A&M Kingsville.

The team is coached by the same coach as the indoor squad, head volleyball coach Jeremy White.

White noted that there are a few coaching differences between indoor and beach volleyball.

White also described some of the unique characteristics of beach volleyball.

While the game will still be volleyball, beach volleyball will be played exclusively in doubles, meaning there will only be two players on each side of the court, as opposed to six in indoor volleyball.

White explained that the team will consist of five pairs of players, along with two alternates.

He also shared that the new system of pairings allow for some strategy in the personnel that is used.

“All five play,” said White. “All five pairs play, but you can mix it up. Like you may have a big kid and a small. So, like a blocker or defender, or you may have two average sized, even tall kids that can move around a little bit. So, maybe they’re split blocking.”

This season, the team consists of mainly crossover players from indoor volleyball. White explained that eventually, there may be more beach-only players.

“This year, we have four beach-only’s, and then the rest of the team will come from crossovers but we are recruiting to expand our beach-only roster,” said White. “We didn’t do any tryouts this year. We may do some in the future, but for right now we held off on it.”

The new beach volleyball complex at North Oak Park will be where the team hosts its home games. White described what it will be like for those who watch the games.

“You’re standing on the big berm space that we have and you’ll be able to sit around the courts and stuff all the way through,” said White. “Those are team areas out there. Beach is a little bit different. You have places with bleachers, but most people like to just chill, throw out  a blanket or some lawn chairs and watch beach like you would on the beach.”

With the indoor volleyball season finished in November, White expressed his excitement to get to compete in more volleyball.

“I’m just really excited about the opportunity to compete in more volleyball,” shared White. “I played a lot of beach as well as a player. It was a majority of what I did, and so to get to come out and coach it and see this sport grow. I love indoor and beach volleyball together both but to see the sport itself grow and now we’re getting to be a part of the fastest growing sport in NCAA history.”