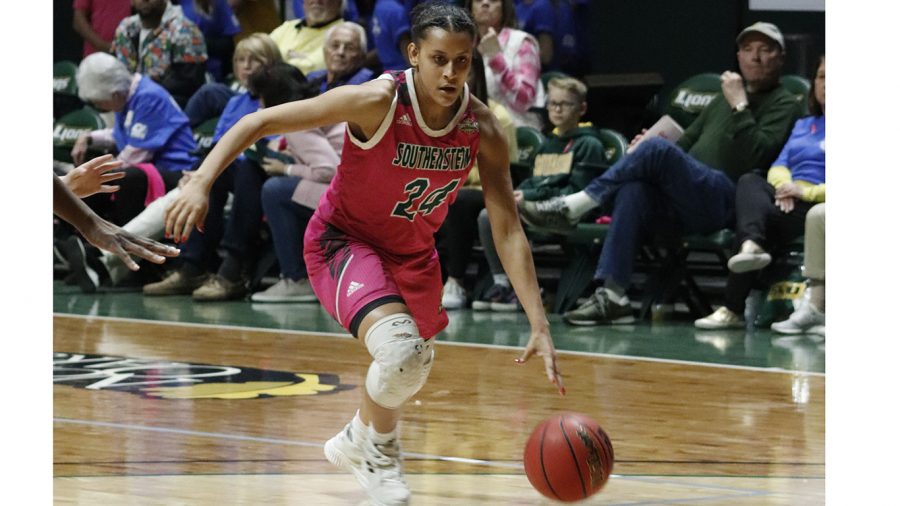 Senior guard Tyler Morrison dribbles down the court. The Lady Lions won their fifth game in a row by defeating Incarnate Word 58-44.

The Lady Lions defeated the Incarnate Word Cardinals on Feb. 8, with a final score of 58-44, extending their win streak to five and securing their eleventh win of the season.

The game was held to raise cancer funds and awareness, promoting the #Play4Kay initiative, named after Kay Yow, North Carolina State women’s basketball head coach who passed away from breast cancer in 2009.

Head Coach Ayla Guzzardo described how playing for a cause changed the mentality and energy at the game and on the court.

“Coach KJ Lee’s little cousin right here, he’s young, and he’s dealing with the cancer as we speak,” explained Guzzardo. “It’s something bigger than us. It’s big for him, and our girls fight for him.”

Guzzardo shared her feelings on winning the fifth game in a row, describing the pride she feels for her team and for her coaches.

According to Guzzardo, the team’s strong defense during the game was the key to securing this victory for the Lady Lions.

“We weren’t scoring,” stated Guzzardo. “58’s a low number for us, but we held them at 44 points. This team averages close to 60. Our defense really picked it up, really locked in on player personnel, knowing what they can do individually, and we got it done on that end.”

Senior guard Charliee Dugas finished the game with four turnovers, three steals and nine points. Dugas shared her excitement on their fifth victory in a row.

“We haven’t done something like this since I’ve been here, so to see this is very exciting,” expressed Dugas.

Dugas explained that she felt her confidence boosted since previous games.

“I felt like previous games I’ve been in a slump,” shared Dugas. “Tonight kind of brought my confidence back up. I feel like I contributed a lot to the win tonight.”