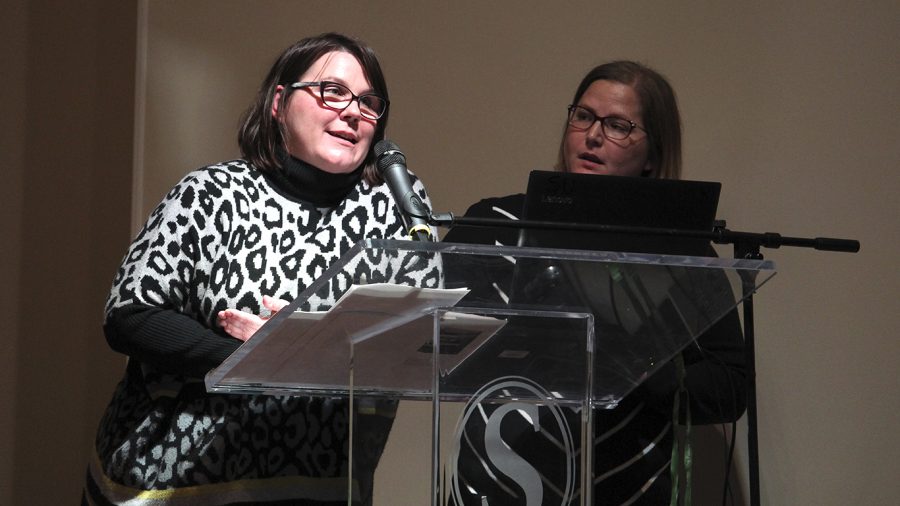 In honor of Women’s History Month, researchers Sarah Simms and Hayley Johnson presented their findings on the history of Japanese internment camps in Louisiana with a focus on Camp Livingston. Their research followed the stories of two families whose relatives experienced the conditions of the camp.

The department of history and political science is hosting a series of lectures throughout March to celebrate Women’s History Month.

Held in the Student Union Theatre, the series consists of four lectures. The first lecture, “Louisiana’s Hidden History of Japanese Internment,” was presented by Hayley Johnson and Sarah Simms on March 5.

Johnson and Simms presented their research on Camp Livingston, a military camp used in World War II as an internment camp for Japanese aliens.

“We believe that sharing both the history and the way we went about uncovering it can serve as a social justice tool to illicit the exploration of racially, ethnically or religiously spurred political decisions that deny citizenship or violate the rights of citizens, which unfortunately are still issues that plague our society today,” said Simms.

The second lecture, “Women, Activism, and Empowerment” by Margaret Gonzalez-Perez will take place on March 12 at 12:30 p.m. The third lecture, “From Kudzu to Koizumi: Japanese in Louisiana,” on March 19 at 11 a.m. will feature special guest lecturer Greg Robinson. The series will end on March 24 at 11 a.m. with “The Mysterious Sofía: One Woman’s Mission to Save Catholicism in Twentieth Century Mexico” by Stephen Andes.

The series has been used to celebrate Women’s History Month since 2001. William Robison, department head for history and political science, explained how the lecture series originated.

Robison also mentioned how the lecture topics are chosen.

“The lecture is either going to be about women’s history, or it will feature a female scholar, or both,” said Robison. “It’s always me looking out for people, for one thing, another just people volunteering. The idea is to have something that’s going to be entertaining and informative.”

Margaret Gonzalez-Perez, professor of political science, has been featured in the lecture series every year since its creation. She commented on the importance of celebrating Women’s History Month.

“I think it’s important to celebrate Women’s History Month because we need to remember how unequal women’s status has been throughout history, and we need to continue to work towards equality for women and men,” said Gonzalez-Perez.

Gonzalez-Perez mentioned what she enjoys about giving these presentations.

“I enjoy giving Women’s History Month lectures because there is such a wide range of topics to address,” shared Gonzalez-Perez. “Very often, students are shocked by the information in the lectures because it’s simply not something that they would normally come across in everyday life.”

Robison explained that the lectures provide an opportunity for the audience to try and look at history through a different perspective.

“How you look at something varies depending on who you are, and I think one of the biggest differentiations is if you’re male or female,” said Robison. “You’re going to sympathize with different people. The only way to really break down that barrier is to listen to other people.”