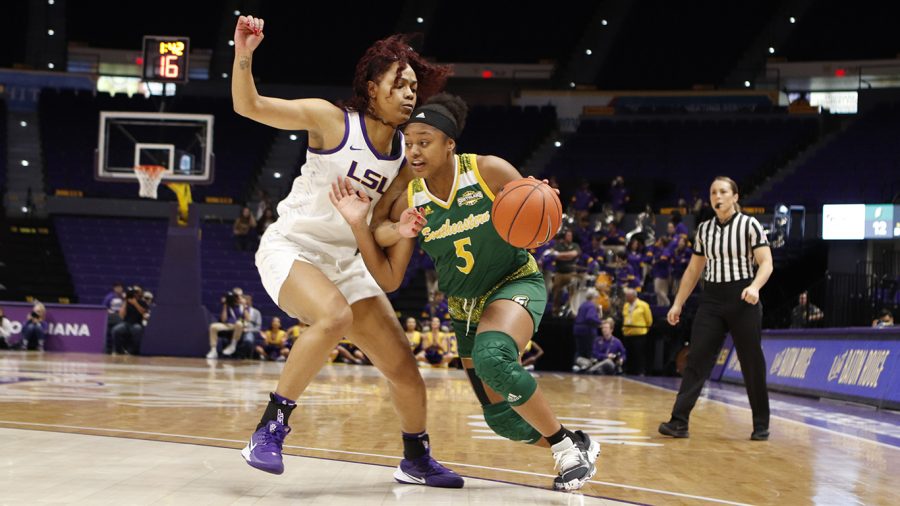 Senior guard Charliee Dugas saw her final season get cut short due to the COVID-19 Virus outbreak. Dugas finished her career averaging 10 points, one assist, 3.3 rebounds and 1.4 steals for the Lady Lions.

As the women’s basketball team warmed up for the Southland Conference Tournament, word had been confirmed that the game would be postponed. Later on, the Lady Lions faced the hardship of having the tournament itself cancelled.

With the tournament cancelled, five of the Lady Lion’s careers were cut short.

Tyler Morrison, a senior guard, spoke on the emotions shared throughout the team once they learned about the cancellation.

“Honestly, hearing about the decision wasn’t something that was easy to take in,” commented Morrison. “It hurt, bad. To know my senior year was cut short after working so hard for four years to make it to the tournament was not something easy to swallow. No one took it lightly and it’s something that will stick with us forever. I am just super blessed to be a part of a team and fan base with strong bonds to where everyone was able to come together and get through it as best as we could.”

Many people have different views on the pandemic. Many fear it and want to take precautions, but others feel this is a bit over exaggerated.

Head coach Ayla Guzzardo shared her concerns about the outbreak.

“I can’t really speak on the virus itself,” said Guzzardo. “I’ve done research and talked to a lot of people about it, and it is scary to think about how easy it spreads.”

Caitlyn Williams, a junior forward, had a slightly different view of the outbreak.

“I feel like the virus itself isn’t as serious as everybody has been making it out to be,” said Williams.

There were also conflicting views on the cancellation of the Southland Conference Tournament.

“I don’t agree with the decision to cancel the tournament just because of all the players that it effects, and I personally don’t think taking such a huge precaution in the sports world will change the rate of those who get the coronavirus,” shared Williams.

Morrison also commented on the cancellations.

“I can’t say I agree or disagree completely,” said Morrison. “I understand the health risk that came about after other tournaments began to get cancelled. I just don’t agree with being given false hope and allowed to warm up and prepare just to be told we could not play the game.”

“I do agree because it’s for the well being of the general public and my team,” commented Guzzardo.

With the future of these players and coaches in the hands of the coronavirus, Guzzardo is leaving all decisions to the NCAA.

“Our plans for the future are up in the air,” said Guzzardo. “Our future depends mostly on what the NCAA says for our sport.”

Women’s basketball is not the only sport on campus that has been cancelled. All university sports have been postponed until March 30. Morrison and Williams did not see eye to eye with this decision either.

“I disagree with the decision to postpone campus sports because it’s unfair to all student athletes,” expressed Williams.

“I agree with everything being postponed on campus,” said Morrison. “A college campus is a definite place for things to get spread, so I think the safe thing is to cancel events/classes and wait until we learn more about the virus to make decisions of returning to our normal lives.”

With new cases of the coronavirus being discovered daily and more precautions being taken, all university sports will be postponed and all university classes will begin online sessions starting Wednesday, March 18.