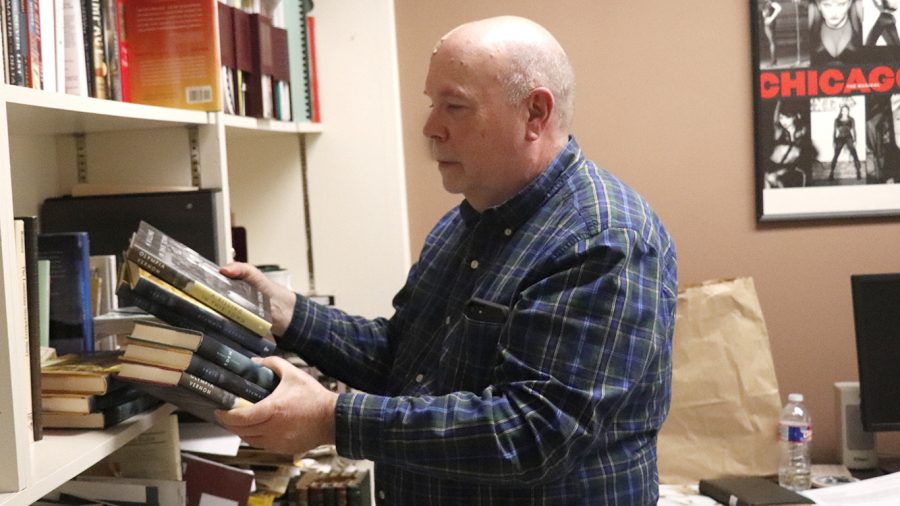 Library director Eric Johnson is retiring this semester after 23 years at the university. “I’m happy with what I’ve done over the years,” said Johnson.

After overseeing Sims Memorial Library for over two decades, the director is preparing to pass the torch.

Eric Johnson, director of Sims Memorial Library, is retiring this semester after 23 years at the university.

The Connecticut native decided that after 55 years of working in libraries, he is ready for a change in atmosphere. Johnson said he is satisfied with his time spent at Sims.

“I’m happy with what I’ve done over the years,” said Johnson. “I’m convinced that we provide the best academic library in the state, and I think it will go on very nicely with the new director. I’ve done my part.”

Johnson’s interest in libraries began when he started working at his high school library.

While working toward his bachelor’s degree in English education at Southern Connecticut State University, Johnson filled in for library workers at Yale University.

“There were 14 floors of books, and every other floor had a person who would get books for people that they wanted and send them down on a dumbwaiter,” described Johnson. “I would fill in for people who went on vacation.”

At the time that Johnson obtained his bachelor’s in English education, English teachers were not in high demand, and he had trouble landing a teaching job. Johnson then decided to get a job at the Yale Arts and Architecture Library.

“At that time, a friend of mine, who had been in the same situation as me, said, ‘You know, we’ve worked at the library for a number of years,’” reflected Johnson. “‘Maybe we should get a library degree.’ It’s like a light bulb went on.”

Johnson then went on to attain a Master of Library Science and build his resume of library positions, including reference librarian at the University of New Haven for 11 years and director of a smaller school in Waterbury, Connecticut.

He received an invitation to apply for assistant director at Sims and was initially hesitant.

“I’d never been to Louisiana before, do I really want to do this?” said Johnson. “And then I thought, ‘Who knows? Maybe I’ll like the area.’ So, I came down here for two and a half days, and on the way back, I said, ‘I want that job.’ I loved this library. I loved the people that were working here at the time. I loved the person who I would be working for.”

Johnson began working as assistant director of Sims in 1996 and became director in 2003. He described his duties as library director.

“What I do is manage a group of people who manage smaller sections of the library, so I don’t need to be an expert on what that area is, but I need to be able to hire someone who is an expert on that area,” shared Johnson. “Budgeting, personnel issues, setting policies, determining collections.”

Johnson noted many changes in the library involving the increase in technology use and the ways students conduct research.

“It’s a lot more self-driven,” said Johnson. “You use Google, databases – you use the librarian now to help you pick out databases or show you how to use them.”

The director described his plans upon retiring.

Johnson shared his love of people and service as the reason he loved his job.

“I like helping people,” mentioned Johnson. “This was not only a mix of talking to people, but also helping them find things. It’s the service part that I like. I love when someone comes into the library and gets the information that they need. That’s why libraries are here.”

According to Johnson, the job title has only recently been made available, and the university is now in search for another director.