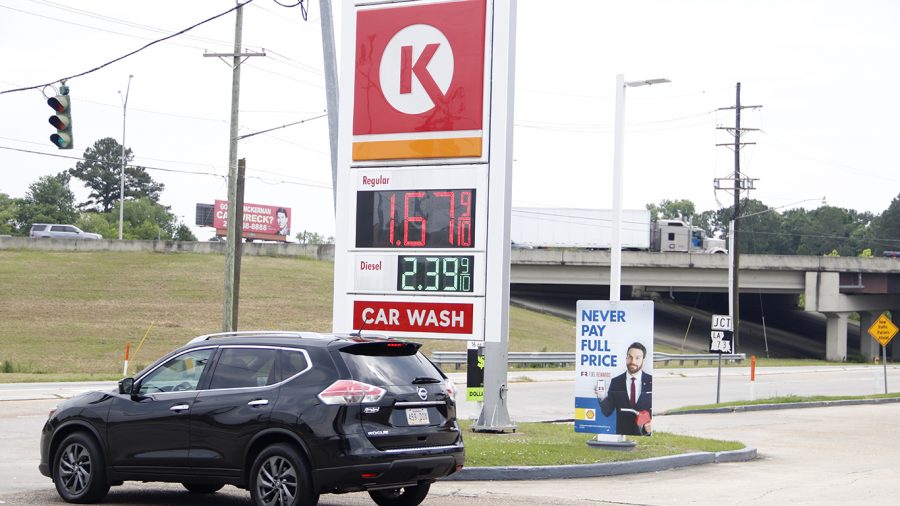 A Circle K gas station off of I-12 in Baton Rouge displays its gas prices. Gas stations around the country post prices under 2 dollars as the price of crude oil reaches historic lows.

U.S. oil prices plunged to a historic low of below 0 dollars a barrel, causing gas prices around the country to continue their sharp decline.

Jay Johnson, assistant dean for the college of business and associate professor of economics, explained that the decline was caused by two main factors.

“As people have quarantined by the stay-at-home order, gasoline consumption has fallen by at least 20 percent and probably more,” said Johnson. “At the same time as the decline in demand, the Russian and Saudi Arabian national oil companies announced they could not agree on production cuts, so the supply and inventory of crude oil continued to increase and crude oil prices fell to under $25 per barrel.”

Along with the decrease in demand due to stay-at-home orders around the country, Russia and Saudi Arabia are currently engaged in a price war over oil.

Thomas Meyer, associate professor of finance, elaborated on the situation between the two countries and how it has contributed to the fall of gas prices.

“The Russians and the Saudis have decided to play a game of chicken, or in other words, ‘who blinks first,’” explained Meyer. “Both countries have decided that they have enough oil-generated reserves to outlast a price war based on lowering prices and increasing output.”

“Normally when there is a significant decline in demand putting downward pressure on prices, the producers all over the world would begin to decrease production or supply in order to maintain prices,” stated Johnson. “However, Saudi Arabia leads a cartel of national oil-producing countries called OPEC and Russia leads another coalition of oil-producing states, and these groups of oil producers did not have a plan in place as the decline in oil demand came so rapidly.”

Despite being good for the consumer, low gas prices significantly damage the economy. Rusty Juban, professor of business, explained how this especially affects economies like Louisiana’s, which depends on high gas prices.

Even if Russian and Saudi Arabian oil companies reach a deal to end the price war, Johnson believes that the price of crude oil will not increase until the pandemic ends.

“In all likelihood, they will reach some agreement to reduce production, which will boost prices,” said Johnson. “Regardless, the biggest problem the oil-producing countries and companies face is the decline in demand. That will not reverse itself until this pandemic is over and demand for fuels to travel and transport goods and services begins to return.”

During a weekly Coronavirus Task Force press conference on April 20, President Donald Trump stated that the United States is considering buying the surplus of oil to decrease the supply in global circulation.