The Lion's Roar • May 6, 2020 • https://lionsroarnews.com/23515/southeastern-channel-students-win-associated-press-awards/arts-entertainment/ 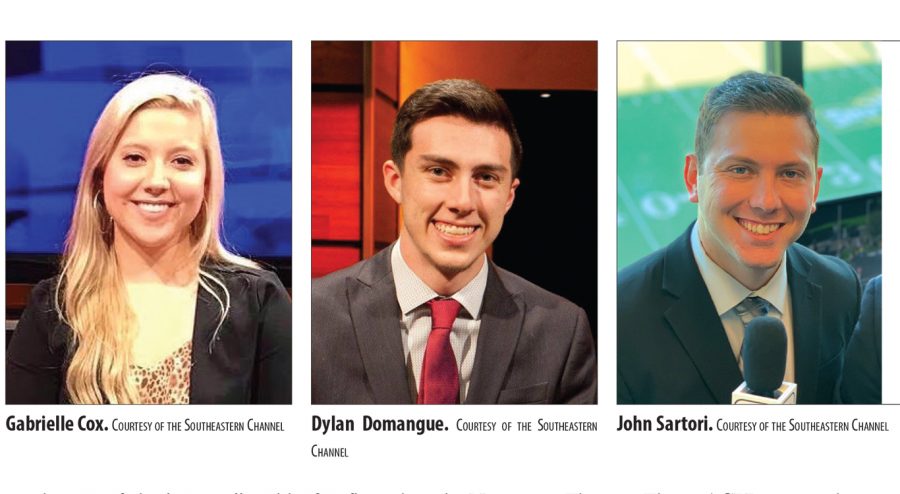 The awards are normally presented to students at the annual APCB Awards ceremony, but due to COVID-19, they were announced through email on Friday, April 17.  Each university that submitted recordings of their broadcast news channel in the Louisiana-Mississippi regions were notified of their honorees.

Out of 12 categories, the Southeastern Channel won six first-place awards, more than any other college in the region. The Channel also had multiple first and second-place winners.

All three students are graduating seniors and are going on to pursue a career in broadcast television.

Sartori explained his initial reaction to finding out he won both the best Sportscast and the best story.

“I was really happy, and I just thought it was really awesome to see all the hard work we had put in had paid off,” said Sartori. “Especially because we all love ‘The Big Game,’ and so we as seniors take a lot of pride in our work.”

Sartori mentioned that he did not expect to win first place when working on his story.

“It was just a showcasing of Southeastern’s football season and ranking because I wanted people to see how long it had been since SELU had been top-five ranking,” shared Sartori.

All three students explained that Rick Settoon, the general manager of the Southeastern Channel, sends in what he thinks is the best work and waits for results.

“We do the show, we review it and Mr. Rick says this is a good show and submits it,” said Cox.

Cox described the feeling of winning her first APCB award after being a part of the Southeastern Channel since 2016.

“I was at work and saw the email, called my mom and dad instantly and it was just a great feeling to know it paid off,” said Cox. “It was just an honor to get the award.”

Domangue mentioned that the awards were a product of their best work.

“We have 11 to 12 shows at the Channel,” explained Domangue. “Each individual can do up to nine to 10 stories. Nothing is forced, we just do our best and choose which show was the best and send it in.”

Domangue’s individual story was on Jaclyn Scholvin, a former player on the women’s basketball team. Scholvin’s mom had passed away as a kid, and her stepfather passed during her senior year at the university.

“It was her idea, and Mr. Rick said it would be a good feature so we went with it, and we actually didn’t get to release it until the following year after she had graduated due to legal reasons on her stepfather’s case,” said Domangue.

The ACPB awards are confirmation of the work being done at The Southeastern Channel, and the Channel hopes to re-emulate their accomplishments for semesters to come.