The Lion's Roar • May 12, 2020 • https://lionsroarnews.com/23547/remembering-grammy-winning-american-cellist-lynn-harrell/arts-entertainment/ 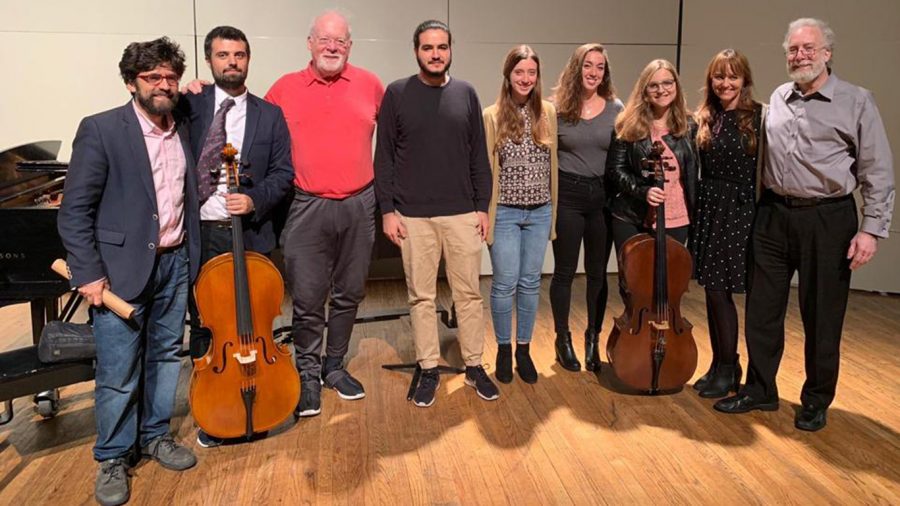 Harrell poses with university students after a masterclass in Daniel Cassin's studio.

On Monday, April 27, Lynn Harrell, an American cellist, passed away.

Over the course of his nearly six-decade career, Harrell performed and instructed internationally. In addition to two Grammy Awards for Best Chamber Music Performance, he was awarded the inaugural Avery Fisher Prize and the Piatigorsky Award.

He and his wife, violinist Helen Nightengale, also founded HEARTbeats which, as stated on heartbeatsforchildren.org, “strives to help children in need harness the power of music to better cope with, and recover from, the extreme challenges of poverty and conflict.”

The news of Harrell’s passing struck a chord with many university professors who have stood in his presence. Daniel Cassin, lecturer of cello, shared that he met Harrell in the early stages of his own career.

“I first met Lynn Harrell in the late ’70s while I was a graduate student at LSU,” said Cassin. “Mr. Harrell was already a major figure in the classical music world by then and touring extensively.”

Last fall, Harrell performed alongside the Louisiana Philharmonic Orchestra for the “Romantic German Masters” recital at The Columbia Theatre for the Performing Arts.

Cassin noted that Harrell exhibited the fabulous cello sound he is famous for producing.

“He and the LPO performed well together, and the intimacy of the Columbia Theatre added to the effect of this beautiful concert,” said Cassin.

“I found his technique flawless and a very natural approach to the instrument, from someone who has a deep knowledge of tradition but has adapted it to a very personal way of playing,” described Correa-Cruz.

Correa-Cruz described that prior to his Schumann Cello Concerto, Harrell offered to teach masterclasses to cello students at the university.

“He had to work on very different pieces from the repertoire, from Romantic Sonatas and Concertos to modern 20th century works by Shostakovich, Barber and Britten,” stated Correa-Cruz. “The audience enjoyed his teaching very much and his demonstrations on the cello were breathtaking.”

Harrell’s visit was made possible by the university’s Lyceum Arts & Lectures Committee, and Cassin expressed his gratitude to the board and the impact that Harrell made.

“Harrell’s warm personality coupled with his great passion for music were infectious,” said Cassin. “We were all abuzz with the excitement of his masterclass, his persona and his wisdom. I believe that the students who participated, along with audience members and faculty who shared in this experience with Lynn Harrell, will carry this creative energy with us for many years to come.”

Correa-Cruz shared the honor he and the department felt to be in the midst of a distinguished figure of the modern history of cello playing, as well as an inspiring artist and humanitarian.

He also identified a quote from Harrell’s Commencement Address in 1994 at the Cleveland Institute of Music, which he described as “wise words that can be applied to any life project:”

“There is never a moment in music when you can say, ‘This is it. Now I have arrived,’” said Harrell. “You just have to keep going. It’s only about yourself, about one practice day after another, about keeping going, and above all, forcing yourself to understand that you never understand it all.”