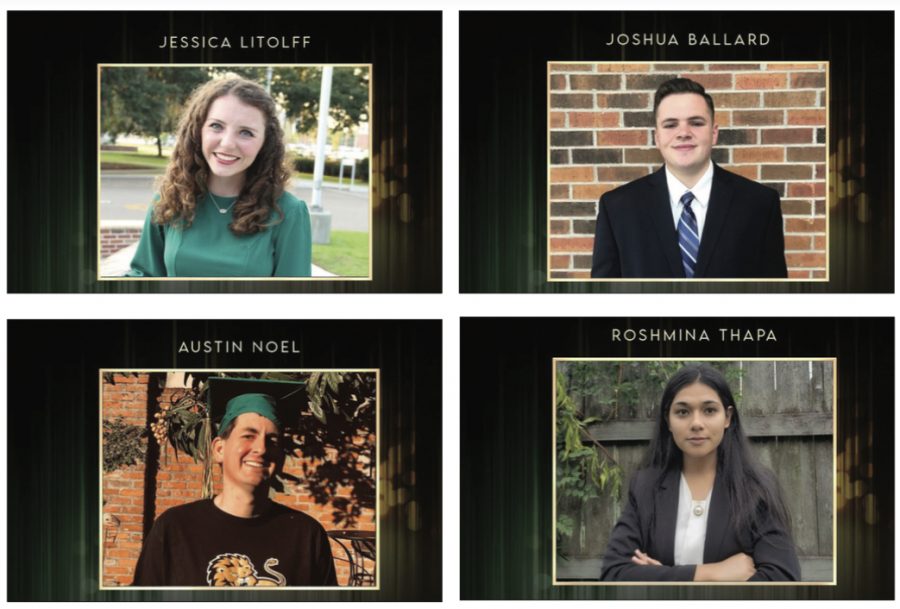 DSA announced winners of various student awards throughout the week, which were posted on Vice President of Student Affairs Dr. Eric Summers’ Instagram page. Though there was no in-person ceremony held, several students were honored by DSA.

Taylor Rivera, winner of the Outstanding Freshman Leader of the Year award, shared how she reacted upon learning that she had won.

“My reaction to receiving Outstanding Freshman Leader of the Year was complete shock,” said Rivera. “I was crying and just so grateful to even be nominated to begin with. Winning is something that I am beyond grateful for, and I couldn’t have accomplished it without so many people who support me.”

Rivera expressed her gratitude towards DSA for considering her for the award and described the experience of her first year as an amazing one.

“I have made connections with so many amazing people who make me the best person I can be,” shared Rivera. “In my first year, I have accomplished more than I ever thought I was capable of, and I am so thankful that I have had such an amazing experience so far.”

This year, Rivera was involved with the Campus Activities Board and Residence Hall Association. She also worked as a math tutor in the Center for Student Excellence and is a 2020 Orientation Leader.

Next year, Rivera shared that she plans to continue and expand her involvement on campus.

“I want to stay involved and make connections with so many people,” said Rivera. “I want to help and serve students in any way that I can. I am so excited for what is to come in the next year and I cannot wait to see what the future holds for me at Southeastern.”

Brianna Carter, winner of the Dr. Lavanner S. Brown Role Model of the Year Award, shared her reaction upon learning that she had won.

“As soon as I saw the post during Student Recognition Week that I received Role Model of the Year, I shed actual tears,” said Carter. “I was truly grateful to be awarded. Being a role model is my passion and purpose. I always want to pay it forward and help as many people as I can, the best way I can.”

Carter was given the opportunity to speak about being a role model at the 2020 Southwestern Black Student Leadership Conference at Texas A&M University.

When Carter was a freshman, she joined the Big Event team which inspired her to get more involved in campus life. Since then, she has been involved in several different groups including Alpha Kappa Alpha Sorority, National Pan-Hellenic Council, SGA and Evolve U.

Austin Noel, winner of the Heart of a Lion award, elaborated on his favorite memories at the university.

“Making new friends each semester in my classes that I have continued to keep in touch with,” said Noel. “Having wonderful professors and getting to know them, on a deeper level than a professional level, but in a personal way. So many professors I’ve had don’t treat us students as ‘less than’ or ‘underneath them’ but as fellow Lions, on a personal level. Which is really special to have professors who treat us like peers and not simply students or numbers.”

Jessica Litolff, winner of Outstanding Woman of the Year, described the friends she has made at the university as very important to her growth.

“My friends really encourage, inspire, support, and push me,” said Litolff. “I would not have had the same college experience without them. My parents are very supportive and have been so helpful in making my ambitions reality. ”