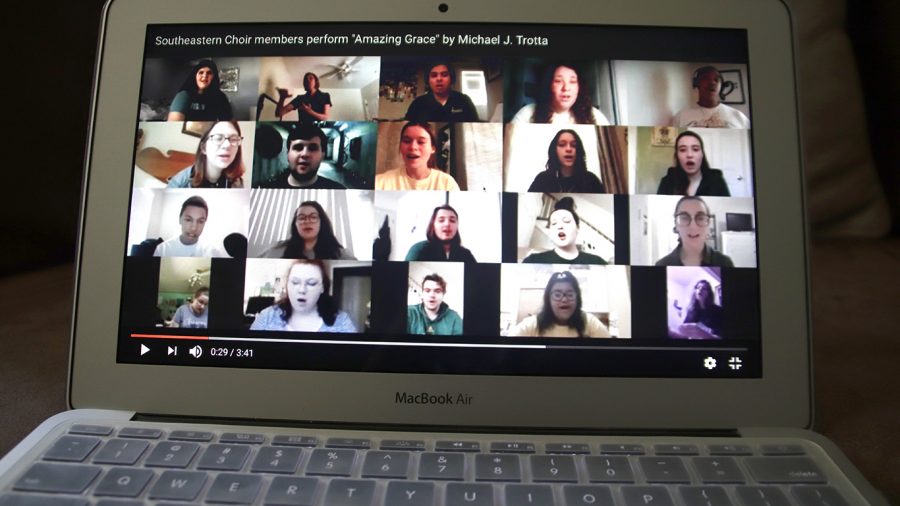 Members of the university's Women's Chorale and Concert Choir perform Amazing Grace online. The video was uploaded by Dr. Alissa Rowe, director of choral activities, in her YouTube channel.

Despite the physical distance, members of the university’s choral ensembles organized an online performance to conclude the spring semester.

The performance was an extra credit assignment that students could choose to participate in.

Dr. Alissa Rowe, director of choral activities, explained that even though it looked like the performance was hosted on a Zoom call, there was intricate work that took place behind the scenes.

“That’s what it looks like, and we were actually on a Zoom call—we all met and we listened to the recording that we had made and pretended to sing along with it,” said Rowe. “I know it seems ridiculous, but that’s how we did it. It’s crazy. We didn’t really have another way to get it together.”

The performance took careful planning and practicing. Rowe explained how the group prepared themselves for the final cut.

“When we were all practicing together on Zoom call, they muted themselves and then they practiced,” expressed Rowe. “So they can all hear me and I can’t hear them—it’s just bizarre, but we did our best to make it work. There were more voices on the recording than you could physically see. I’d say there were 30 singers who participated.”

Due to social distancing measures, the choral ensembles have not been able to express themselves in a group setting. Rowe explained that the performance was a special opportunity for the students.

“The way we express ourselves is through our voice, and we haven’t been able to do that together as a group,” said Rowe. “This was just a golden opportunity for them.”

Rowe’s favorite aspect of the online performance was the sense of hope it brought for her and her students.

“When we all saw the finished product, it made us feel the same way we would have if we had been performing in a concert together,” expressed Rowe. “We got to experience what the audience normally experiences, and that’s really special for us.”

Caleb Porter, a graduate assistant, delved into the technical aspects of organizing the performance. He admitted that the editing itself took a number of hours.

“After extracting the audio from each student’s submission, I had to line up every audio track, balance the volumes to create a cohesive sound, add pitch correction and edit out some of the constants in order to make them sound like they line up,” explained Porter.

Porter explained that, due to the recordings being made separately, there is no way to balance voices with one another.

“The video part was actually simple, since we were only lip-syncing over Zoom to the mixed audio track that I put together,” said Porter. “Because of the lag-time on online video chats, it’s not really possible to do a real choir performance virtually.”

As a graduate student, Porter juggled a number of responsibilities, including a full load of classes and teaching an undergraduate course as part of his assistantship.

“However, it was work I enjoyed doing, and it enabled me and my classmates and friends to have a final ‘moment’ together making music this semester,” expressed Porter. “The desire to create something beautiful, even virtually, was the real driving force.”

Porter expressed the benefits of organizing the online performance.

“Virtual choir performances like this are definitely inspirational,” explained Porter. “It was very emotional for some of us on the Zoom recording to sing and hear each other together for the first time in months. Several of us were crying by the end of it.”

The performance can be viewed here.