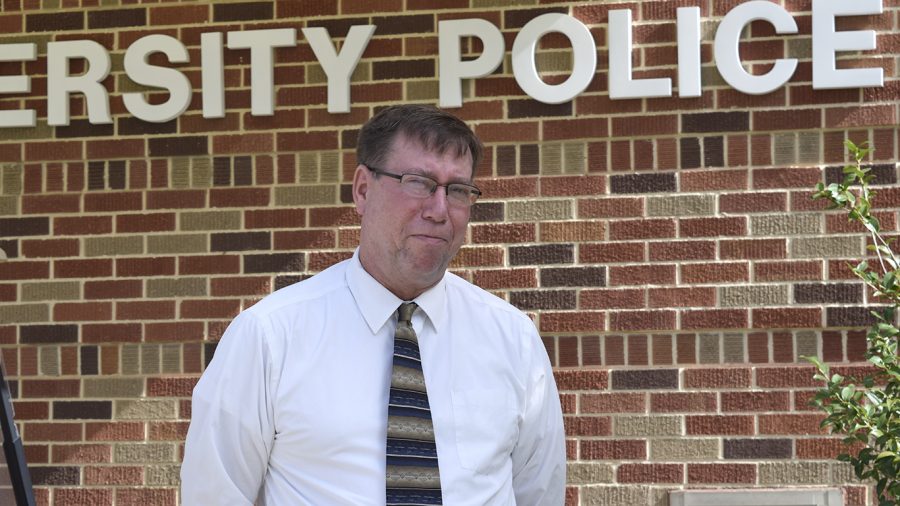 A new chief has been selected as head of the University Police Department.

With over 25 years of experience in law enforcement, including 14 years of university policing, Michael Beckner joins the Lion family from Augusta University.

Originally from New Jersey, Beckner served in multiple police departments, including Alcorn County in Mississippi and the University of Alaska Anchorage, before coming to Hammond.

Beckner shared his first impression of the university and surrounding community when he visited early last year.

“When I first came down in May 2019, I was very comfortable when I got to Southeastern,” recalled Beckner. “Everybody here is super nice and seems to be super supportive, and they kind of have the same ideas that I do about student success. I like that Southeastern is a humongous part of the Hammond community. I think Southeastern offers everything that I want to finish out my career. Everybody I’ve met over the last couple weeks, I’m just really excited to work with them.”

As chief, Beckner explained his vision for the UPD, which includes more community involvement.

“Any police department belongs to the community they serve, and the community we serve is our students,” said Beckner. “Yes, we do enforce laws and rules and regulations, but also I want people to be able to come to us and see us getting out and being a part of the community, engaging in whatever we’re doing.”

Becker also plans to create a Police Advisory Board that will consist of students as well as other members of the campus community.

“One of the first things we’re looking into doing is creating a Police Advisory Board,” shared Beckner. “That’s going to include students, different members of different departments, the dean of students, the director of multicultural affairs, student government, hopefully a student-athlete so that it encompasses everything.”

The advisory board will allow people to address their concerns to a group of people that also want to serve the community.

“If somebody feels that they’ve been treated wrong, they can have a place to voice that concern, and then we can look at it,” mentioned Beckner. “It’s also a group of people that we serve that can recommend training that we need to take as police officers and things of that nature to better our police department but also give our community a say.”

Beckner also wants to promote community engagement by having officers give presentations once a semester.

“It doesn’t have to be safety presentations, they can think outside the box,” mentioned Beckner. “If they want to have a movie night with students, that’s fine also. Each officer has to do at least one a semester, so looking at 24 officers, that’ll be 48 presentations that we’ll have each year.”

One of the ways the UPD has grown is through their social media. Their TikTok page now has over 20,000 followers and over 127,000 likes.

“We’ve created our own TikTok page here,” said Beckner. “We’re going to do some safety videos, but we’re also going to do some fun videos on there, too. I think it’s very important to reach students where they’re at, and TikTok and some of the other platforms, that’s where students are at now.”

Beckner elaborated on some of his long-term goals for the department, including focus areas for training and department growth.

“Some long-range goals are to be more involved in the community, to get our staffing levels where they need to be,” commented Beckner. “The university has grown over the years, but the police department has not. I want to focus on crisis intervention training and de-escalation training. The police department is here 24 hours a day, so if a student is having a crisis, nine out of ten times we’ll be the first person to talk to them, so I want officers trained on how to deal with somebody who’s in crisis and how to de-escalate the situation.”

In addition to making plans for the UPD, Beckner collaborated with Hammond’s Chief of Police, Edwin Bergeron Jr., to find out how the two police departments can work together. Bergeron shared some of their ideas for collaborations.

“We both agree that a combined training effort, officers training together and working together is important, being that we operate within the same jurisdiction,” said Bergeron. “Further, we spoke about some of our downtown areas, bars and things that college students go to, him having some of his police also working with our guys to make sure that the students are protected and taken care of when they are out and about.”

Bergeron shared his thoughts on Beckner taking over as chief of the UPD.

“My first impression of Chief Beckner was that he was very knowledgeable about the university systems and university policing,” commented Bergeron. “I was very impressed by some of his ideas and plans that he had, things that he wants to do. I’m looking forward to having a police chief at Southeastern who’s willing to work with Hammond’s police department, and I’m looking forward to accomplishing some great things with him.”

Beckner emphasized that he wants the campus community to feel comfortable with reaching out and contacting the UPD with any ideas, concerns or suggestions.

“I want students, staff and faculty to realize that we’re an open door,” said Beckner. “I want to hear people’s ideas. I want people to make suggestions, like what they’d like to see their police department do and be involved in on campus, and to actually understand that we’re going to look at everything seriously. I want people to hold me accountable. If they don’t see what they want to see, they can come and tell me.”