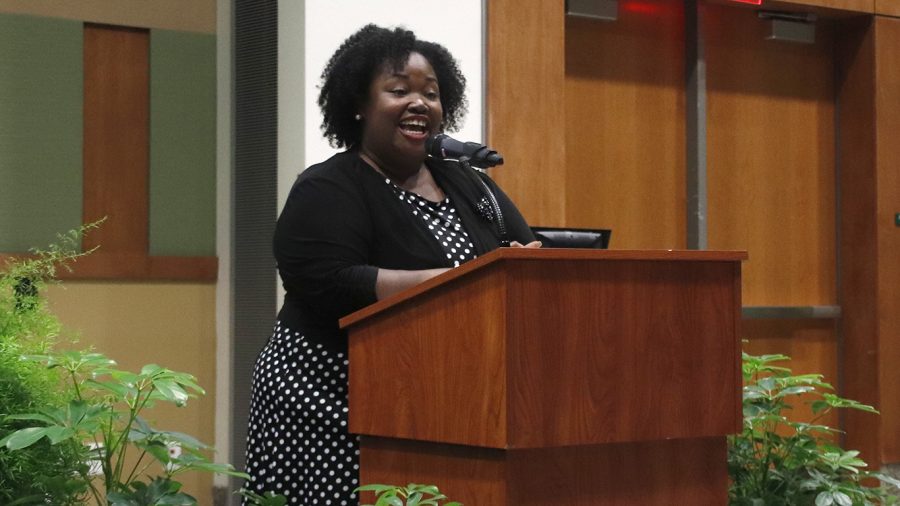 OSE director Marjorie Parker speaks to the audience during the 2019 DSA Convocation ceremony.

University staff members have many passions outside of their nine to fives, some of which include starring in Netflix films.

Marjorie Parker, director of student engagement, shared the screen with Jamie Foxx in the new Netflix movie “Project Power.” The New Orleans based film trended number one on Netflix during its debut weekend and maintained the streak for 10 days.

Parker’s scene took place inside a Church’s Chicken restaurant as she played the server waiting on Foxx. She shared her experience working alongside the Academy Award winning actor.

“Jamie Foxx’s energy was magnetic from the time he walked in the restaurant,” said Parker. “He had a Bluetooth speaker with him, taking song requests, singing and telling jokes. He was a lot of fun to work with on set.”

Parker shared how Foxx made the long filming process and an easy-going experience.

“We were in Church’s Chicken for hours,” mentioned Parker. “We filmed multiple camera angles.  Jamie Foxx made it so easy to work and joked almost every time I said my line. It was very exciting.”

10 years of professional acting through the Louisiana Talent Agency led Parker to her latest role.

“They do a great job connecting me with casting directors and arranging auditions for me,” shared Parker. “I was fortunate to get this audition and that’s how I heard about the filming of the movie.”

Parker’s acting journey began when she attended the New Orleans Center for Creative Arts (NOCCA) during high school, specializing in Theatre Arts. She has even found ways to bring her love of acting to the Hammond community.

“When I came to SLU, I had the opportunity to work with Jim Winter and Chad Winters on multiple shows, including “Medea,” “4.48 Psychosis” and “Much Ado About Nothing,” explained Parker. “Since graduating from SLU, I’ve been fortunate to work professionally in film, television and commercials. I have the opportunity to teach Drama and direct over 200 Upward Bound students in their yearly Summer Productions at the Columbia Theatre.”

Chad Winters, the university instructor of acting and directing, recollected on his time working with Parker.

“Marjorie was one of the first actresses I worked with when I started at Southeastern,” mentioned Winters. “It was always a joy to work with her and she was very professional.”

Hearing about Parker’s role was an exciting moment for Winters.

“I recently heard of “Project Power” once Netflix began to promote it,” shared Winters. “A lot of it was shot in New Orleans, which is nice to see that Hollywood South is still moving along. It’s always exciting to see our students working in the film industry.”

Parker shared how she has been overwhelmed with support by her loved ones.

“My family and friends’ support and love has been overwhelming,” expressed Parker. “I’m truly blessed with the best. From the calls, texts, social media posts and comments, everyone is so loving.”

Once the pandemic dies down, Parker plans to continue building on her acting career.

“Acting has always been a passion of mine,” said Parker. “I am working to build my video reel and get back to acting when things are safe.”