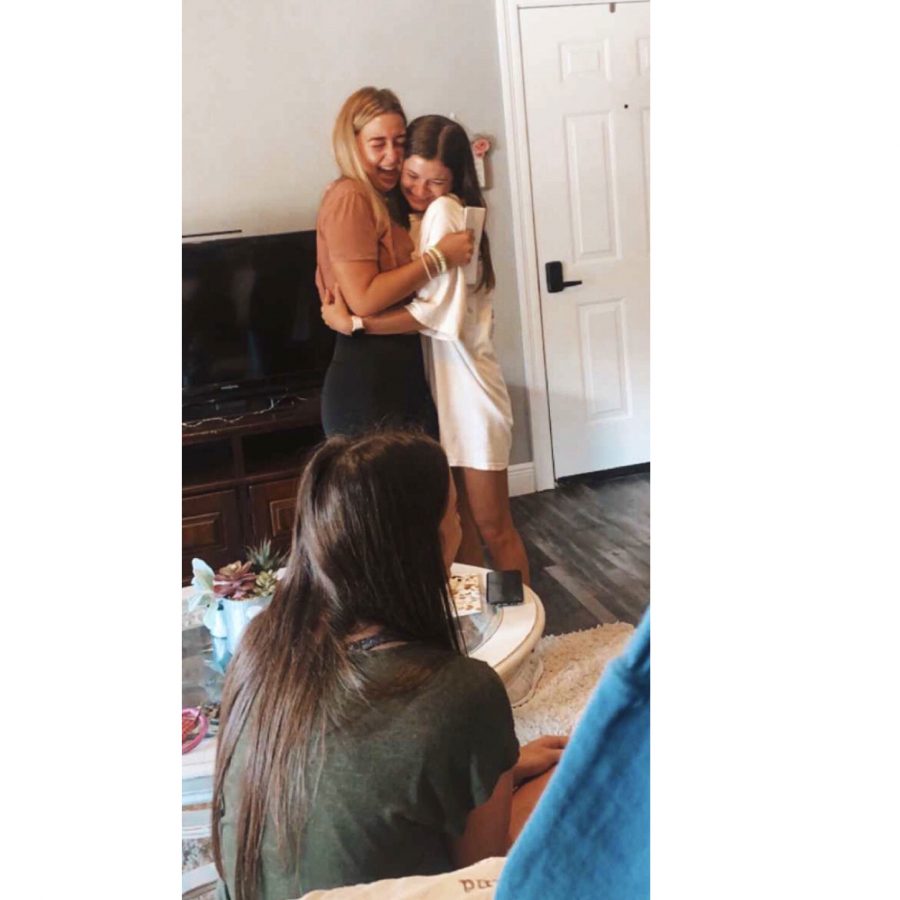 Sydney Ardoin, a sophomore communication sciences and disorder major, hugs Delaney Inabnet, a sophomore early childhood education major, as members of Phi Mu present a check to Ardoin. Ardoin is a native of Lake Charles, and her family was affected by Hurricane Laura.

With the help of sororities and fraternities around the country, Phi Mu was able to raise over $4,000 for a student affected by Hurricane Laura.

Sydney Ardoin, a member of Phi Mu and a sophomore Communication Sciences and Disorder major, is a Lake Charles native whose home was severely damaged when Hurricane Laura ravaged through the city on Aug. 27.

Ardoin stayed in Hammond when the hurricane made landfall and her family stayed in Lafayette with relatives. She described the extent of the damage of their house.

“Our house got totally destroyed,” said Ardoin. “Our ceiling fell in and all of our floors got water damage.”

Delaney Inabnet, a sophomore early childhood education major, was inspired to organize a fundraiser to help Ardoin out, sympathizing with Ardoin due to her own home being flooded in 2016.

“Back in 2016, my house got flooded really bad and a lot of families donated money to our family, and that was something that really helped us personally when we had to buy groceries or get gas and with the normal house bills,” said Inabnet. “Having that really helped, that way all your income can go towards repairing the house. I wanted to do something similar for her.”

Inabnet explained how the fundraiser got started.

“I made a GroupMe with everyone else in the sorority except Sydney,” shared Inabnet. “I told everyone that if they each donated like $10, that’s like $500-1,000 we can get to her family. I sent out my Venmo and told them to Venmo me.”

Inabnet had originally intended to give a gift card to Ardoin. However, the fundraiser quickly spread to other Greek Life organizations and Inabnet’s Venmo was flooded with donations.

“It ended up getting sent in fraternities and sororities at LSU, Ole Miss, Alabama, Mississippi State, Oklahoma,” explained Inabnet. “It got sent everywhere just from all of the other mutual connections of at least one other person in that organization. It just blew up so we ended up just writing her a check because you can’t get a Walmart gift card for over $4,000.”

Ardoin initially received a check for $4,500 and a list of organizations and people who had contributed. She shared her reaction to receiving the donation.

“I literally cried,” shared Ardoin. “I was so surprised. I thought I was just going to eat lunch with my friends and stay with them for a little while. It was very exciting, and I was really thankful for them. So, I definitely cried when I found out.”

Ardoin’s family is continuing to stay in Lafayette and plan to rent a house while they rebuild their home in Lake Charles. Ardoin described some of the hardships that her family is experiencing currently.

“Dealing with insurance has been very challenging because obviously everyone is filing claims,” said Ardoin. “Finding a place for my family to live and be normal has also been tough. They don’t have power in the house right now. We have a generator for like half of our house, but that is about it. My little brother is having to go to school in Lafayette because his school is super damaged. He is a senior.”

Though Ardoin has already received a check from Inabnet, people are still donating.

“We are still getting donations from people,” shared Inabnet. “Since it got spread pretty far, we couldn’t just tell people not to donate. Now that Sydney knows about it, I just Venmo it straight to her.”