Tinsley Hall back in operation after months of closure 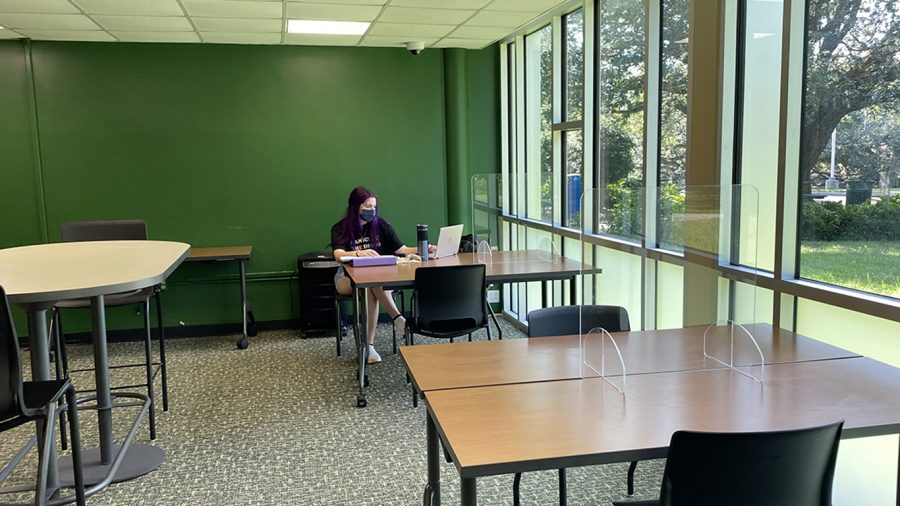 After months of renovating and add-ons, Tinsley Hall is finally open this semester.

The building had been out of use and surrounded by a fence while construction workers cleaned out old rooms, tore down walls and added a new computer lab to transform the building into the university’s new tutoring headquarters for subjects like math, physics and chemistry.

The first floor of the building consists of a computer lab and study lounge surrounded by large windows. The second floor holds all the rooms for tutoring sessions and multiple wide-spaced classrooms where Supplement Instruction for CHEM 121 and PHYS 191 is being held.

Supplemental Instruction is where students who are having difficulties with a class can come together to have a study session in order to help strengthen their knowledge on that subject.

Tinsley Hall will also be hosting the Upward Bound Program once more of the rooms have the finishing touches, such as new computers added in.

Marie Bernard, learning assistance coordinator, has been overseeing all tutoring since the program was located in the Center for Student Excellence. She stated that they were supposed to move in January, but due to some changes, ended up in temporary quarters.

“We were near the DSA and OSE before the pandemic, where we were downstairs, but after Tinsley was done, we settled in here nicely,” shared Marie Bernard.

Due to the new renovations at Tinsley, Marie Bernard says that she enjoys it and thinks the students will, too.

“The windows are so big, which really lets in all the beautiful natural sunlight and opens up every room,” said Marie Bernard. “I absolutely love the space and all my tutors do as well. It’s very different from being in the CSE.”

Madelyn Bernard, a sophomore marketing major, tutors students in Math 105 and Business. She mentioned that she likes the Tinsley Hall location better than the CSE.

“I was always excited to move because Tinsley was new, but it is way more space over here and a lot nicer,” said Madelyn Bernard. “There were no windows over there.”

Tutors also have their own rooms in the new location.

“Now it’s nice since everyone gets their own room to tutor people instead of at the old building when we were tutoring in the same room,” commented Madelyn Bernard.

Dajonique Johnson, a sophomore early childhood education major, is a Math 241 tutor. She elaborated on the effects the transition has had on tutoring.

“It is a lot better and a lot more rooms,” said Johnson. “More individual rooms so that we can each give each client the proper attention they deserve, and the view is a really nice bonus.”

Since the building recently opened, many students are still not aware of the resources at Tinsley Hall.

Karah Guidry, a junior biological sciences major, is a usual in the downstairs lounge where she does her studying. She shared why she likes going to the lounge.

“I’m just always on this side of campus, and it’s just so nice and perfect,” shared Guidry. “Since it is so new, I guess that is why nobody is ever here, which I can appreciate and am trying to take advantage of now.”

All hours and SI times can be found on the official university website under Supplemental Instruction. Students can either schedule a face-to-face appointment, visit the building or have an online drop-in session.