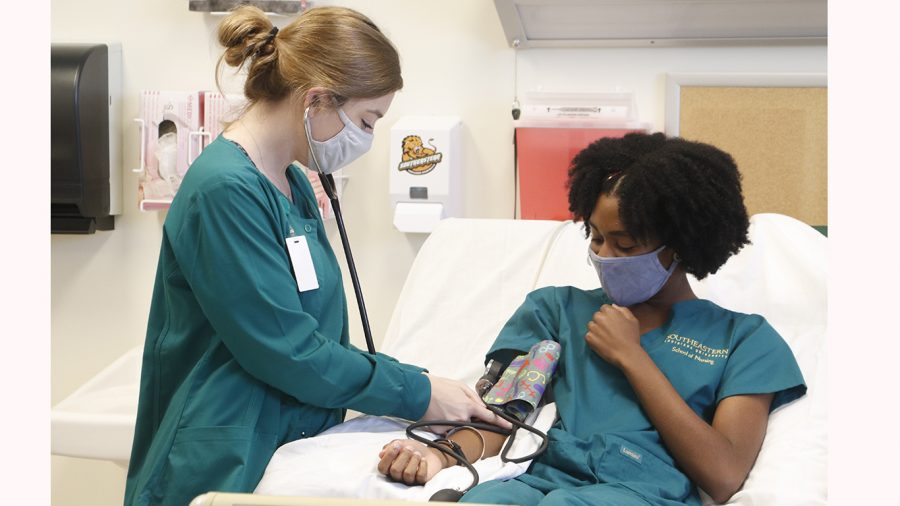 The university’s department received the title ‘Nursing School of the Year.’ The award honors the program’s achievements.

The university’s nursing department recently received the title of ‘Nursing School of the Year’ for its undergraduate degree program.

The title is also referred to as the Nightingale Award, an award that honors the achievements of undergraduate nursing students and faculty.

Kenneth Tillman, department head of the school of nursing, expressed that the program is fortunate to have passionate and dedicated students and faculty.

“Healthcare employers in the region consistently give us positive feedback on our nursing programs and graduates,” stated Tillman. “Of course, the faculty of the School of Nursing are the ones preparing tomorrow’s nurses, and like our students, they work hard and are dedicated, passionate teachers.”

Tillman detailed how he feels about the School of Nursing’s accomplishment as the department head. He believes that all students and faculty can share the sense of pride.

“I am very proud the School of Nursing is the recipient of this year’s Nightingale Award for Undergraduate Nursing Program,” expressed Tillman. “It is a well-deserved honor, and one that all nursing students and faculty, past and present, can share.”

Tillman shared some words of advice for prospecting members of the nursing program.

“We admit well-qualified students who put in many hours of study time in order to be successful,” explained Tillman. “Nursing students will tell others the nursing program at Southeastern is not easy, but once those students graduate from the program and become alumni, they tell everyone the rigor and hard work was worth it.”

She acknowledged that the program has a reputation for being difficult and shared her own experience as a student within it thus far.

Upon getting accepted, Jordan found it difficult to break out of a perfectionist mindset. She explained that her professors helped her along the way.

“For example, I didn’t do good on my first test, and I was shattered. I got an 85, which isn’t bad when you’re not in nursing — but that’s a C in nursing,” explained Jordan. “My professors reached out to me, encouraged me to reach out to them and helped me come up with ways to get my grades up.”

Another aspect of the nursing program that Jordan enjoys is her peers.

“They all want you to succeed. They know what you’ve been through because they’ve been through it too,” expressed Jordan. “Everyone’s so helpful and willing to study together and give you study tips. Everyone wants to see each other excel, which is really refreshing coming from an extremely competitive process to get into nursing.”