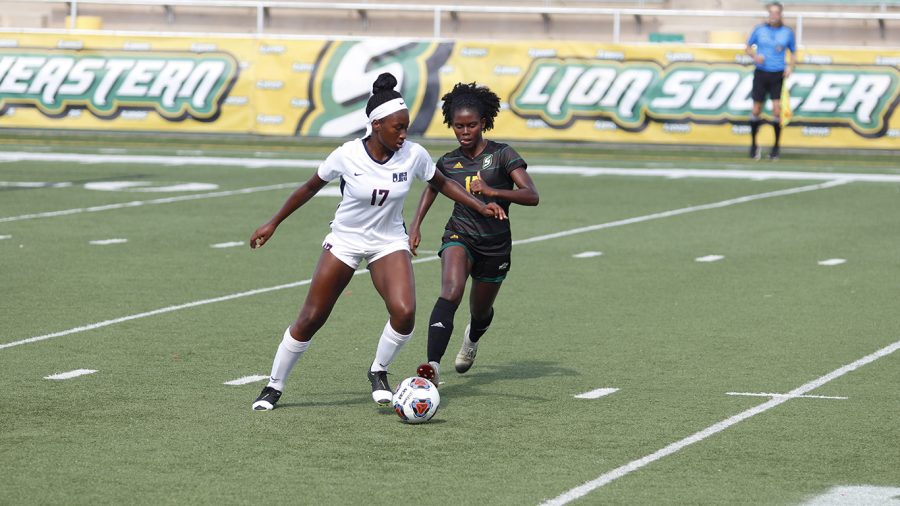 Ellie Williams, sophomore forward, started 14 of the 17 games she played in for the 2019 season. Williams led the Lady Lions in the 2019 season with four goals, 27 shots and 10 points. Williams is a native of Frisco, Texas.

The Southland Conference announced that the women’s soccer season will resume playing in the spring due to the COVID-19 fall sports shutdown.

In mid-August, the conference commissioner announced that all fall sports, including women’s soccer, would be postponed.

“We were very excited to see that the Southland had announced the schedule,” mentioned McBride. “We knew athletic director Jay Artigues had been tirelessly working behind the scenes to work with the other conference athletic directors and Southland representatives to make our season happen, and we are grateful for that.”

Even though the fall season was postponed, the Lady Lions have been practicing as they would be during a regular season.

“We have been treating this off-season just like any other,” shared McBride. “We have been training five days a week and been putting a lot of time into developing our athletes as much physically and tactically as possible.”

McBride shared what he thinks are the benefits of having an elongated off-season.

“One of the benefits we have is that we can train this off-season with our freshmen,” explained McBride. “Normally, they come in, and two weeks later, are required to play in a conference game. However, this year, we have been able to train them with the team to get them accustomed to the environment and style of play.”

The third-year head coach commented on where the Lady Lions are as a program and how he anticipates the starting lineup will compete against each other.

“Where we are at as a team right now, we have a large group that are making it very competitive,” said McBride. “Every week, we have a competition for the starting line up, and each week, this off-season it has been changing. Everyone is putting in a lot of work and pushing each other to get better. It’s one of the many qualities this group brings this year.”

The Scotland native explained how the upcoming spring season will be unlike any other.

“I think it’s going to be even more competitive than before,” said McBride. “Usually, teams have a non-conference schedule to work out who plays where, what system works best, etc., but this year, everyone will return after Christmas and need to play against a conference opponent immediately, which will be very challenging but very competitive.”

McBride shared where he thinks the Lady Lions can improve on from last season after finishing a subpar 4-13-1.

“I think we can improve everything,” said McBride. “We would like to score more goals, concede less goals, create more attacking opportunities, have better discipline defensively, more creativity offensively, and these are all areas we have been working on this fall.”

McBride explained how the team looks as of this week.

“Right now, we are really happy with where we are as a team,” said McBride. “These first four weeks of our training have been extremely intense. Some players have really stepped it up in practice and our inter-squad games. We will be looking forward to competing against other teams next spring. We open up with Lamar away, which will give us a strong indication of what we need to do moving forward after that.”

The Lady Lions will open up the 2021 season on the road for a Valentine’s Day battle against Lamar University in Beaumont, Texas.