Students speak up about disconnection from peers 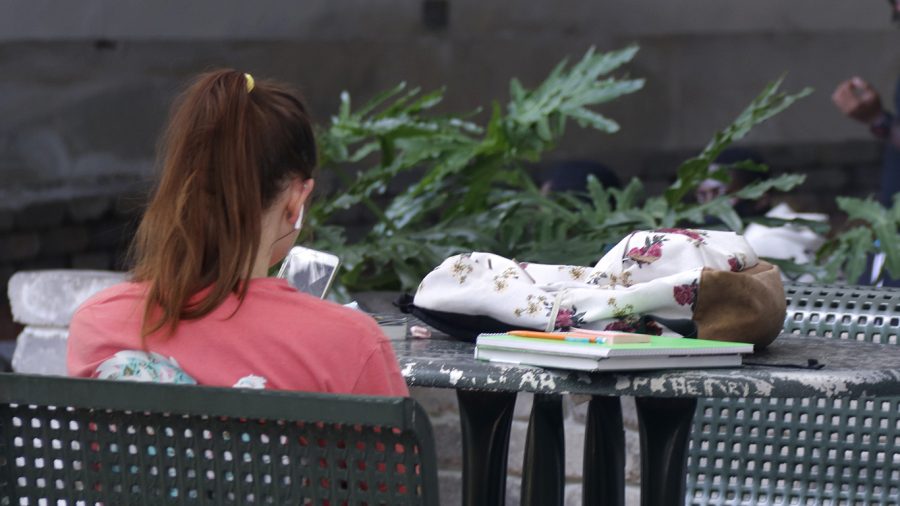 A student studies outside the library. As most classes are conducted with an online format, students have expressed that they feel disconnected from their peers.

Due to a lack of in-person events and traditional class formats, several students have expressed that they feel disconnected from their peers.

In compliance with current federal and state guidelines for colleges and universities, the university has taken efforts to limit in-person interactions and promote virtual events and class structures.

Many students feel that the measures being taken have resulted in them feeling detached from campus life.

Gabrielle Louisia, a communication sciences and disorders graduate student, attends several online only classes and feels that it does not allow for much interaction.

“I have a few classes where I am in-person with other students and that definitely helps, but with the ones that are only online, I don’t see them,” said Louisia. “As an introverted person, my first instinct is not to reach out that much, so most people in the class are mostly secluded.”

Louisia also shared that she generally feels distant from what is happening on campus.

“I would go to extracurricular activities and see a lot of people around campus in prior semesters,” noted Louisia. “Now, because everything is either mostly online or just flat out isn’t happening, I don’t get to see people. Normally, randomly bumping into people on campus or at another event is how I got most of my social interactions and that hasn’t happened at all this semester.”

Michael DeGraauw, a junior history major, also feels somewhat disconnected from the people around him. However, he mentioned that since he is a part of Spirit of the Southland, he gets to see a lot of his friends on a regular basis.

“Band has helped me because I get to see people everyday for that,” explained DeGraauw. “In general for classes and stuff, I do feel more disconnected because we are only there for one day of the week, at least for me. So, it is hard to get a real connection with everyone, even if we get a GroupMe or something going.”

While DeGraauw is a member of the band, not having many in-person events has left him feeling detached from campus life.

“I have no idea what is going on half of the time,” said DeGraauw. “Normally, especially in the fall, I would be at the football games and have a little bit more knowledge about what is going on, generally speaking. Now, without the games, it feels like everyone is kind of just going through the motions a little bit.”

All of DeGraauw’s virtual classes hold their lectures on Google Meet. During these Google Meet sessions, DeGraauw shared that it is hard to connect with the rest of the class, especially in hybrid formatted classes.

“There is a giant disconnect between teaching to just the people in the classroom and trying to teach people who are both in-person and online at the same time as well,” noted DeGraauw.

He believes that being able to communicate with the rest of the class via applications such as GroupMe can make a difference, but it does not completely solve the problem.

“You are able to ask other students for help or when an assignment was due,” shared DeGraauw. “At the same time, it doesn’t really help to connect with other students and sort of becomes just a help group for the class per se.”